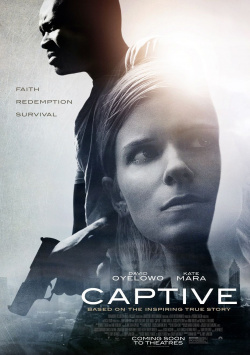 Atlanta, March 11, 2005: Actually, Brian Nichols (David Oyelowo) was supposed to be tried for rape that day. But after he managed to overpower a female guard and shot the judge and two other people, he managed to escape from the courthouse. Desperately searching for the fugitive killer, Detective John Chestnut (Michael K. Williams) and his colleague are hot on his trail when Nichols takes young Ashley Smith (Kate Mara) hostage. The single mother is currently desperately battling her crack addiction and is trying everything she can to start a new life in order to get her daughter Paige back. But when Nichols hides out at her house and holds her at gunpoint, it looks like she'll never see Paige again. And for the first time in her life, Ashley is willing to do anything to make sure it doesn't come to that...

With Captive, filmmaker Jerry Jameson, now 80, returns to the cinema. For many years, Jameson worked primarily for television, working on series such as Dallas, Magnum and Walker, Texas Ranger. The many years in television have left a lasting mark on Jameson's style. In many moments, his thriller-drama has the feel of a TV movie - which doesn't necessarily mean a bad thing. And indeed, the story based on Ashley Smith's book about her experiences of being taken hostage by Brian Nichols offers absolutely solid genre fare. The first third in particular has some compelling moments of suspense. Nichols' escape is grippingly staged and also has a very engaging narrative pace. Also Ashley's somewhat clichéd struggle against her inner demons is absolutely convincing here, especially through the convincing play of Kate Mara.

When the film turns more and more into a two-person chamber play in the second half, the still quite subtly used advertisement for a Christian self-help book and the associated message also becomes more and more obvious, which already spreads a rather unpleasant aftertaste here. However, this is very well countered by the actors. Their acting prevents the film from degenerating into a religious sob story of the particularly intrusive kind. But what they don't manage to do is keep the tension going. The dialogue is too rambling and repetitive, going nowhere in that it doesn't really bring the audience any closer to the characters.

Up until the finale, the film still offers solid entertainment. David Oyelowo (Selma) gives the character of the fugitive killer some interesting facets, though the script does little to support him. However, as soon as the story is over and the final shot, drowned in Hollywood kitsch, can be seen, one should immediately jump up and leave the cinema hall. For what is seen in the credits destroys many of the positive impressions the film managed to leave, despite its flaws. In some parts of the US, the message that is communicated here with a sledgehammer, which the film had fortunately avoided in such bluntness up to that point, may go down very well. In this country, however, the whole thing - to put it nicely - probably seems rather alienating to most.

Captive is truly not a bad film. But from the true story could have been drawn much more tension especially towards the end and the good actors would have undoubtedly deserved a better script. In the end, all this is only enough for a: worth seeing with reservations!