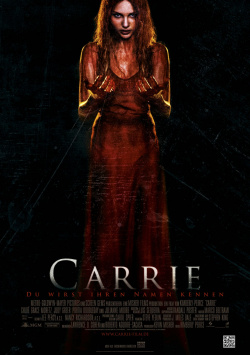 Although he has published nearly 60 books in the last thirty-nine years and sold nearly 400 million copies of them, Stephen King's first novel Carrie is still considered by many of his fans to be among the author's best and most landmark works. And the first film adaptation from 1976 by Brian De Palma is also one of the few Stephen King adaptations that can be called truly successful. After an unnecessary sequel from 1999 and a weak TV remake from 2002, director Kimberly Peirce (Boys don`t cry) has now taken on the material again.

The story she has hardly changed. At the center is the outsider Carrie White (Chlo&euml; Grace Moretz), who is kept away by her religiously fanatical mother (Julianne Moore) from everything that girls her age actually enjoy. That Carrie is therefore teased and bullied by her classmates in the worst way, her mother blames on the morally corrupt society, which is controlled only by lust and sin. But Carrie isn't just different because of her mother's behavior. She also has telekinetic powers that grow stronger the more humiliation the girl has to endure. When she is asked to prom by heartthrob Tommy Ross (Ansel Elgort), who is actually dating the pretty and popular Sue Snell (Gabrielle Wilde), Carrie initially thinks it's a bad joke. But when the boy assures her he's serious, she can't resist his charms for long. Against her mother's wishes, Carrie says yes and goes to the prom with Tommy - a decision that will end in disaster.

Kimberly Peirce bases her version of the material less on the novel than on De Palma's film adaptation. And therein lies the biggest weakness of what is otherwise a solid adaptation overall. Peirce completely misses the opportunity to create something entirely her own and perhaps focus on aspects of the novel that De Palma neglected. Instead, it invokes inevitable comparisons to the first film adaptation that it simply can't stand up to. Peirce also largely misses the opportunity to reinvigorate the story after nearly forty years. The script only deals in passing with the interesting approach of incorporating cyber-bullying into the plot, though surely some more psychologically interesting aspects could have been worked out here.

Craft-wise, the film is fine. The problem here is that this Carrie just isn't scary. For instance, Chlo&euml; Grace Moretz, for all her acting talent, is just too cute for this role. She in no way resembles the girl Stephen King describes in his book. And while that may also be true of De Palma's Carrie Sissy Spacek, at least she's perfectly delivered in the role of the somewhat odd outsider. When 2013's Carrie goes berserk and uses her powers to cause death and destruction, Moretz comes across more like an exasperated X-Men and less like a girl driven by rage, hatred, and demonic murderousness. And that, too, just takes away from the horror inherent in King's great book. Really only Julianne Moore is convincing here, delivering a frighteningly good performance as a woman driven by religious fanaticism. It is she, then, who in the end manages to just barely help the film out of mediocrity.

Because even though Kimberly Peirce has directed a fairly entertaining film, her version simply lacks all the things that made De Palma's adaptation so successful. Not only does the 2013 version have significantly less blood to offer, and even the shower sequence at the beginning has been stripped of all its intensity in favor of political correctness (and not necessarily because of the lack of bare breasts). No, even an iconic scene like the ending of De Palma's film is completely absent here. It's nice to look at, and pleasantly suspenseful at moments. But this Carrie is unfortunately not really devilishly good. And therefore: really only worth seeing for younger horror fans who don't know De Palma's film!