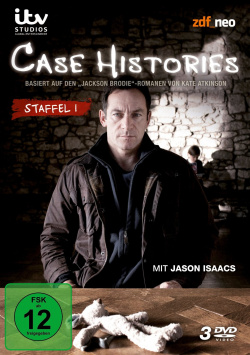 Content: Once upon a time, former soldier Jackson Brodie (Jason Isaacs) was a respected cop in Edinburgh, Scotland. But he has since retired from active police service and is trying to earn a crust as a private detective. Things have also looked better for Brodie in his private life. He lives apart from his wife Kirsty and sees his daughter Marlee far too rarely. But even when life doesn't seem to mean well for the ex-cop, he always manages to impressively use his outstanding gift as an investigator for his clients. Whether he's trying to solve the disappearance of a girl 30 years ago, gets involved in a mysterious car accident, or gets on the trail of an illegal prostitution ring, he always manages to unravel the tangled connections between the individual investigations and thus solve his cases. Only a dark chapter from his childhood catches up with him again and again and puts his psyche properly to...

The series Case Histories based on the Jackson Brodie novels by Kate Atkinson is a real enrichment for the ever more extensive subject of the British crime series. This is not only due to the extremely atmospheric camerawork and the thrilling cases, but primarily to the charismatic and profound main character, who is superbly embodied by Jason Isaacs (Harry Potter). Isaacs skilfully switches between charming irony and undercooled seriousness, which is also repeatedly tinged with dark despair due to memories of the death of his little sister. At times Brodie is a cool gentleman who has women at his feet, at other times he is the unyielding investigator who drives his secretary Deborah (Zawe Ashton) and his former boss DC Louise Munroe (Amanda Abbington) crazy with his very special manner and his stubbornness. And then there is his side as a loving father who has to come to terms with the fact that his ex-wife and daughter will soon be living far away and he will then see Marlee even less often.

All these different facets make Jackson Brodie an extremely interesting character who is a pleasure to watch as he investigates. The three double episodes themselves are very exciting, even if the intricacies between the cases Brodie takes on in each episode do feel a bit contrived at times. But what the stories lack in sophistication here, the production makes up for in atmosphere, suspense and overall entertainment value quite quickly. For Case Histories is excellently implemented crime fare that knows how to captivate from the first to the last scene. Whether it's quieter dialogue sequences or atmospheric moments of suspense, these first three cases of Jackson Brodie fly by and leave you wanting more! So fans of atmospheric TV crime dramas should definitely pick up this box set.

And this is what the episodes of the first season are all about:

Jackson Brodie is a former police officer who now works as a private detective in Edinburgh. In his private life, he lives separately from his wife Kirsty, with whom he has a young daughter named Marlee. Currently Brodie is trying to solve the disappearance of little Olivia Land. The problem with this is that the girl disappeared 30 years ago. However, after her sisters Amelia and Julia Land find an old stuffed animal of Olivia, they ask Brodie to resume the search. In parallel, Jackson Brodie helps lawyer Theo Wyre solve the murder of his daughter Laura. At first it seems that Theo himself was the target of the killer, but Brodie discovers during his investigation that Laura was no longer the innocent girl her father had thought her to be... (Text: ZDFneo)

Jackson Brodie discovers a woman's body in the water during his morning jog. He tries to retrieve her, but the current is too strong. When the police arrive, the body is gone. Meanwhile, crime writer Martin Canning witnesses a brutal assault on Peter Bradley in an underground car park. Canning, who should be fearful, beats the attacker into flight and accompanies the victim to hospital. At the request of the doctor, who is reluctant to discharge Bradley from the hospital because of his head injury, Martin Canning even stays with Bradley for the next 24 hours. But when Bradley falls asleep, Martin goes through Bradley's things and discovers a gun. Gloria Hatter is also in the clinic: Her husband had a severe heart attack, but not at the alleged meeting, but while visiting a prostitute. This one bears a strong resemblance to the young woman Jackson Brodie discovered dead in the water that morning. (Text: ZDFneo)

Private detective Jackson Brodie witnesses a car accident: the car of an old lady comes off the roadway and remains on the railroad tracks. Brodie tries to save the old lady, but the car is hit by a train. When Brodie wakes up in the hospital, young Reggie is sitting next to him. She saved his life on the tracks. Brodie agrees to help her find her friend Dr. Joanna Hunter and her young son in return. Reggie fears that Joanna's husband is behind the disappearance. In addition, Brodie discovers that his papers were switched while he was unconscious on the tracks. He now possesses the wallet of one Andrew Jones. Using his driver's license, he rents a car and sets off with Reggie to find Joanna. On the way back, he is stopped by the police. When they check the driver's license, Brodie is arrested, because Andrew Jones is a multiple murderer. (Text: ZDFneo)

Picture + Sound: The atmospheric images of the rugged coastal landscape around Edinburgh can unfold well on the DVD. Although there are in the darker scenes here and there recognizable losses in detail representation and minimal image noise, but overall remains through the decent overall sharpness and the coherent color scheme one honest positive overall impression. The same goes for the audio, which is in stereo and more than satisfactorily fulfils its primary purpose of making the dialogue and some atmospheric ambient noises sound well-matched. Good!

Extras: Unfortunately, the box has no bonus material to offer.

Conclusion:Case Histories is a thrilling, extremely entertaining crime series that lives on its exciting cases and the investigator charismatically embodied by Jason Isaacs. Even if the connections between individual investigations seem a bit contrived, the high entertainment value of the series hardly suffers from it. The pleasant pinch of humor, the good actors and the very atmospheric camera work make the first season British crime entertainment of the best kind. And for this there is also an absolutely deserved: Recommendable!