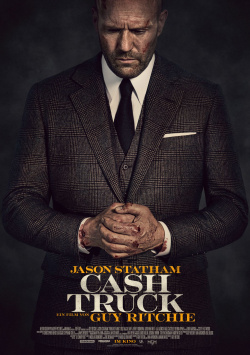 After a bloody robbery of one of its cash trucks, a renowned security firm in L.A. is under pressure. Something like this can't happen again, or clients will stay away. Helping out is supposed to be the closeted "H" (Jason Statham), who has just been hired here. But on his very first assignment, his van is ambushed as well. But unlike his terrified colleague (Josh Hartnett), H keeps his cool and takes out the gangsters single-handedly. It doesn't remain the only robbery that H prevents with ice-cold precision skills and seemingly steely nerves. Not only his colleagues wonder who the mysterious loner really is and what his true intentions are in the company...

With "Cash Truck", Guy Ritchie delivers a much more conventional film after the critics' and audiences' favourite "The Gentlemen", which is a remake of a 2004 French thriller. Reunited with Jason Statham, star of previous directorial efforts like "Bube, Dame, König, grAs" or "Snatch", the filmmaker doesn't offer his fans typical Guy Ritchie action fun this time around at first glance - especially since there's actually hardly any of the bitterly wicked humor familiar from earlier films. "Cash Truck" is a rather gritty, bloody revenge thriller that leaves little room for humor.

What drives H and what secret he's hiding is revealed relatively early on. And with that, the film seems to have quickly shot its powder. Completely conventional and lacking in surprises? What else is there to come? Exactly here Ritchie shows his very own handwriting. He shifts the story to different time levels, thereby revealing unexpected twists in the story and also manages to keep the tension up until the end, despite a certain predictability. And so it doesn't bother then much that at the end a few general questions remain open and some elements of the plot are not exactly logical.

Because the entertainment value is very high from the first to the last minute despite all the weaknesses. Guy Ritchie has managed to tell an extremely conventional story in a way that keeps you riveted, even though you've seen similar things in countless other action films. And although Jason Statham is once again primarily playing Jason Statham, he is simply perfect for the role of H. All of this ensures that "Cash Truck" is much better and more entertaining than its less than original story would suggest. If you like good action and solid thrillers, you can really recommend this one. Worth seeing!