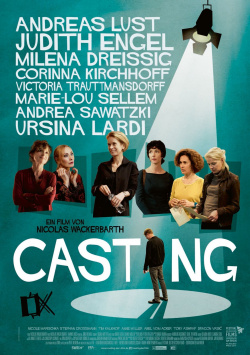 Preparations for the shooting of a TV movie are in full swing. The shooting schedule is ready, the sets are built, it can actually start at any moment. It's just too bad that director Vera (Judith Engel) hasn't found a leading actress yet. The best actresses in the business come to the casting, but for Vera the ideal cast is just not there. While the producers are getting more and more nervous and the crew is also getting more and more nervous, Gerwin (Andreas Lust), who earns his money as a rehearsal audition partner, is happy about the extra work.

Casting is a satirical look at the film business, but also more generally at the subject of self-promotion. Nicolas Wackerbarth's largely improvised comedy amusingly shows what happens when outsized egos clash, or when wounded vanity and a penchant for self-promotion are at loggerheads. When a famous actress, who actually has roles thrown at her, has to be made to understand why the director insists that she undergoes the hated casting process, or when another has to be told, with as many innocuous compliments as possible, why she has to wear a wig for the casting, the result is a mood that is in itself very unpleasantly charged, but which can be humorously discharged through slight exaggeration.

And again and again one asks oneself as a viewer: Where does acting begin for the actresses invited to the audition. Not until the actual casting or already when entering the studio? What is real and what is staged? All in all, this is entertaining and sometimes very amusing, but at times also quite exhausting to watch. The improvised game is supposed to suggest a certain authenticity, but that's exactly why it seems too artificial and strained in many moments. At the beginning this doesn't really stand out in a negative way. But the more the events escalate, the more the feeling of authentic play disappears, whereby the whole thing somehow loses its charm.

Those who plan to work in film or television had better not watch Casting. Because here the picture of a nightmare factory is drawn, a fairground of vanities, in which really only played and dazzled what the stuff holds. The fact that this comes despite some weaknesses quite amusing and biting, leads to the fact that the film has earned a bottom line worth seeing absolutely.

Cinema trailer for the movie "Casting (Deutschland 2017)"
Loading the player ...