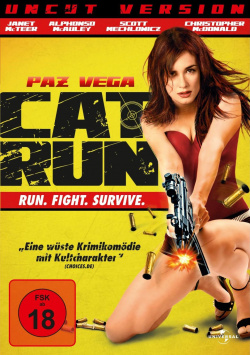 Film: Actually, it should be for the noble call girl Catalina (Paz Vega) a normal job. With some colleagues she should make sure that the guests at the party of an Eastern European politician are well entertained in every way. But then it comes to a bloodbath and only Cat can escape. The host doesn't like the fact that she stole a hard drive with highly explosive information, which could be dangerous for US Senator Bill Krebb (Christopher McDonald). And so the unscrupulous Carver (Karel Roden) sets one of his best men on the call girl: the professional killer Helen Bingham (Janet McTeer). And while Cat is being chased across half of Europe, rookie detectives Anthony (Scott Mechlowicz) and Julian (Alphonso McAuley) are also hot on her heels, hoping to help the attractive Cat. Too bad, though, that the two friends are complete dorks and soon find themselves in an adventure that has bullets and body parts flying around their ears...

Cat Run is truly not a film for sensitive sensibilities. There's swearing for all it's worth, naked breasts and other genitals that don't necessarily still have to be on the actual owner's body are shown, blood spurts by the gallon and political correctness also seems to be a foreign word for the makers. Especially towards the finale, director John Stockwell (Into the Blue) shoots a little beyond the limits of good taste. But overall, the film is so unrestrainedly over-the-top brutal, infantile and tasteless that you just have to enjoy it.

The strongest character in the film is undoubtedly Helen Bingham, the best professional killer in recent action cinema. With a British supercool friendliness that sends shivers down your spine, Bingham always finds the nastiest ways to get her interlocutors to talk. Janet McTeer gives this killer lady such a great performance that you can't wait for Bingham to strike again. The title character Paz Vega, on the other hand, is not allowed to make much use of her acting talent and has to look good first and foremost. This mission, however, she fulfills to the fullest satisfaction, especially the male viewers.

Picture + Sound: The picture is very clean and has a fairly high overall sharpness, which is noticeable even in smaller details. Black levels are also neatly matched, resulting in a pleasingly minimal loss of quality even in the darker scenes. The rich coloration also allows the occasionally beautiful shots to stand out well. The 5.1 Dolby Digital mix not only ensures that voices and music sound well-matched from the speakers. Also the numerous sound effects, primarily shootouts, can be heard and provide a lot of dynamics in the tonal events. Very good!

Extras: Let's go with an audio commentary by director John Stockwell and producer Bill Perkins. The two talk in a relaxed atmosphere about shooting in Serbia, the benefits of working in Eastern Europe but also the problems that came with working with an almost entirely Serbian crew. A quite entertaining commentary, which unfortunately does not have optional subtitles.

Continues with an unfortunately quite short, but entertaining Making of (about 15 min.), as well as some cut scenes (about 14 min.), which have a few quite nice moments to offer, but would have slowed down the pace of the film noticeably and therefore rightly fell victim to the scissors. The trailer for the film and a trailer show from the provider round out the bonus offerings. Good!

Conclusion: Cat Run is a rather crude, extremely bloody action-fun that can make up for the rather flat story and the unrestrainedly cannibalized clichés with its completely over-the-top humor, cool visuals and the best female assassin in recent film history. The DVD is technically very well implemented, the bonus material is manageable, but good. If you like movies like Smokin`Aces with a touch of old Guy Ritchie works and don`t mind raunchy humor, naked facts and excessive bloodshed, you might have fun with this amusing chase. Recommended