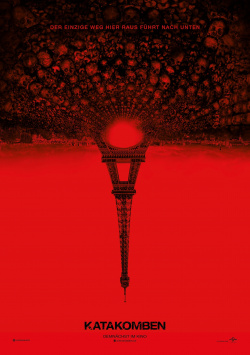 Paris - The City of Love. Romantic landmarks like the Eiffel Tower, the picturesque banks of the Seine, wonderful sidewalk cafe&eacute;s - a city can't really be more beautiful. But there is also a dark, unknown side of the French metropolis. And it is located almost five floors below the streets of Paris. Here, from the 18th century until 1860, the remains of over 6 million people were buried in an extensive catacomb system, as the capacity of the cemeteries was quickly more than exhausted due to the rapid increase in population. Today, the catacombs, which greet visitors with the verse Halt! This is the realm of death, only a small section of about 2 km in length is open to the public. In all, however, a tunnel system of nearly 290 km stretches beneath the streets of Paris.

It is here, of all places, that archaeologist Scarlett Marlowe (Perdita Weeks) suspects Flamel's Philosopher's Stone, that legendary artifact that can supposedly turn any metal into pure gold. Her research has revealed that there must be a secret chamber in the catacombs where this fabled stone is hidden. In order to restore the honor of her late father, who everyone thinks is insane, Scarlett must find this chamber at all costs. Accompanied by her sidekick George (Ben Feldman) and the amateur filmmaker Benji (Edwin Hodge), the daring woman sets out on the dangerous journey. She is to be helped by the mysterious Papillon (Fran&ccedil;ois Civil) and his companions Zed (Ali Marhyar) and Souxie (Marion Lambert), as Papillon also knows his way around the passageways, which are not freely accessible. But the group must quickly realize that a demonic danger lurks in the depths of the catacombs, confronting them with their own personal hell.

Catacombs is another representative of the somewhat overused horror subgenre of the found footage film. Accordingly, there are again many scenes in shaky handheld camera optics, which is just not everyone's cup of tea. However, if you're up for it, you'll get a really thrilling horror trip with claustrophobic suspense and a terrific sound design that gives you goosebumps. The film can't necessarily score with a sophisticated dramaturgy, but benefits from the fact that it wasn't allowed to shoot in a backdrop, but in the real catacombs of Paris. The filmmakers were not only given permission to work in the parts accessible to the public, but also in otherwise inaccessible tunnels. This allowed them to build an atmosphere that rises above any hole in logic, no matter how big, and keeps the viewer riveted until the finale.

However, a slightly better script could have made the film much more intense. You can tell that the makers let the story slip out of their fingers a bit towards the end and really only rely on the effect of the gloomy catacombs here. While this is still effective, it doesn't leave any impression dramaturgically. Thus, Catacombs is the perfect creepy fodder for the hunger in between. But the whole thing rather doesn't have what it takes to become a genre classic, despite some very intense moments. If you don't mind the found footage look and if you liked movies like The Descent, you can safely descend into the depths of Catacombs. But if some good shock effects, creepy sound and an oppressive atmosphere are not enough for you, you might want to stay on the surface. Worth seeing

Cinema trailer for the movie "Catacombs (USA 2014)"
Loading the player ...