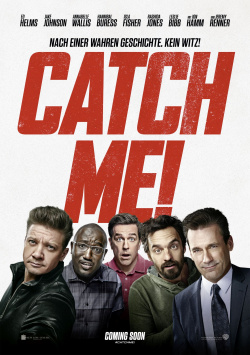 Since childhood, friends Hogan (Ed Helms), Bob (Jon Hamm), Randy (Jake Johnson) and Kevin (Hannibal Buress) have had one goal for one month out of the year: to finally catch their buddy Jerry (Jeremy Renner) in a game of tag that the men have been playing for three decades now. Jerry is the only one so far who has never been caught. He's always one step ahead of his friends - but this year everything is different. Because Jerry is getting married, and that's the perfect opportunity for the others to put the long-awaited end to his winning streak. But Jerry wouldn't be the pro he is if he hadn't expected it long ago.

As silly and crazy as the story may sound, Catch me! is actually based on a true story. A group of grown men from Spokane, Washington have been playing a game of catch for 30 years, along the lines that we don't stop playing because we get older - we get older because we stop playing. Her unusual hobby became the hook for a Wall Street Journal article. That article served as the inspiration for director Jeff Tomsic's feature-length debut, for which he was able to recruit a fine ensemble of actors. While Ed Helms and Jake Johnson (New Girl) are generally known for more comedic roles, Mad Man star Jon Hamm and Avenger Jeremy Renner also get to show their comedic side here for once, which Hamm in particular does very well.

No question, the movie has some really funny moments. Especially because the idea is so wonderfully absurd, quite a good mood comes up again and again. But unfortunately these few amusing scenes are not enough to carry the inherently very weak framework of clichés, pathos and overdone silliness. And that's a real shame, especially considering the good-humored cast and the outnumbered successful gags. Because it becomes clear time and time again that the film could have had the potential to be a truly great, bitterly wicked comedy - but that potential is simply wasted in many places.

When the action does get a little more serious or emotional, which is especially true of the final act, it somehow feels out of place. Tomsic fails to combine comedy and drama to give the film a coherent whole. The fact that there's no clear resolution to the final conflict suggests that the makers clearly assumed they were making a sequel here - or that they were afraid of dragging the audience down too much after 90 minutes of slapstick. As a result, the ending somehow feels unfinished and unsatisfying. But since the comedy rarely succeeds in really pulling the audience along anyway, this shortcoming is hardly noticeable in a negative way. Amusing, on the other hand, are the scenes presented by the credits: They are shots of the real-life role models at play. And here it becomes clear that reality and fiction are not that far apart. Nevertheless, the bottom line is only one: Conditionally worth seeing!