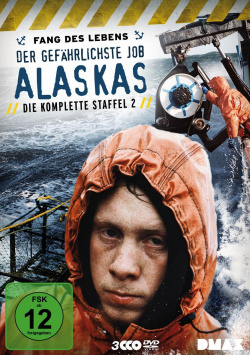 Catch of a Lifetime- The Most Dangerous Job in Alaska, The Complete Season 2 - DVD

Content: The new fishing season in the Bering Sea off the coast of Alaska has begun. In pursuit of the lucrative king crabs and, once the temperatures really start to plummet, the coveted ice sea crabs, the crews of the Time Bandit, the Cornelia Marie, the Wizard and the Northwestern must once again face quite a few dangers in order to fish as many bulging catch baskets out of the sea as possible. Storms, ice, equipment defects, bureaucracy, injuries, quarrels within the crew or simply empty fishing baskets are always causing dicey situations, tense nerves and frustration. But even house-high waves and arctic temperatures cannot stop the fishermen from dreaming of the catch of a lifetime...

Since 2005, the documentary series Catch of a Lifetime- The Most Dangerous Job in Alaska has been produced by the American Discovery Channel. The 8 seasons of the series so far have won two coveted Emmy awards and been nominated for the television award five other times. Because even if the starting situation of the series - observation of life and work on some fishing boats in the Bering Sea - are only slightly varied and it is actually always just about the heavy fishing baskets in the water to carry them later as full as possible back on board, so the whole thing has an extremely high entertainment value, which is due to the sometimes spectacular images and the sometimes very unique characters maintained throughout the season.

For example, when the crew of the Cornelia Marie has to free the entire ship and the fishing baskets from a heavy layer of ice in rough seas, when a fisherman has to smash a pinata blindfolded on his birthday in high seas, or when a choleric boatswain loudly complains about his lack of breakfast at 5 a.m., or when the crew's baskets fly overhead in the waves, and the joy of a successful catch is all the greater afterwards, it's just fun to watch the men do the most dangerous job in Alaska.

Surely, as with other docu-series, some situations are again over-dramatized by cuts, camera angles and sound effects. Also with the arguments on board it can be assumed that not everything is reproduced here quite authentically. But when it comes to the essentials, the work on the fishing baskets, which repeatedly costs the lives of fishermen, there is no need to work with tricks and staging in order to create suspense. And that's exactly where the series gets its appeal, which can be maintained in these 12 episodes despite some minor lengths and a few less exciting episodes. So if you like series like Ice Road Truckers or already liked the first season, you definitely shouldn't miss the second DVD box set of Catch of a Lifetime- The Most Dangerous Job in Alaska.

Picture + Sound: As with other documentary series, the picture quality is on a good level, only in the sequences that were shot primarily during action at night or during strong storms, small blurs and image noise can be made out again and again. But overall, for the picture as well as for the stereo sound dominated by the interviews and voice-over commentaries as well as some sound effects, both are perfectly adequate for a docu-series like this. Good!

Extras: Bonus material is unfortunately not included on this set.

Conclusion: Catch of a Lifetime- The Most Dangerous Job in Alaska is an exciting docu-series that varies its basic idea only slightly in each episode/season, but still does a first-rate job of keeping the viewer well entertained with spectacular footage. The DVD box set of the second season from 2006 presents the 12 episodes in decent technical quality, but unfortunately has no extras on board. Nevertheless, this set can be warmly recommended to all fans of docu-series like Ice Road Trucks or Whale Wars