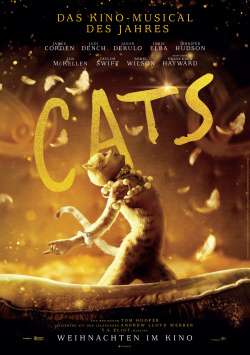 I love the cinema. Not only because of the very special atmosphere in the cinema hall, but because of the variety that always unfolds on the screens there. There is always something for everyone - because tastes are different. And that's a good thing. As a film critic, I see it as my job to take a step back from my own personal feelings and ask: Does this film serve its target audience? Will it make the people who spend not a little money on it happy, entertain them well, or inspire them in some way? After all, as someone who loves cinema, I want as many people as possible to visit movie theaters as well.

So with every film, I strive to find something positive as well. Admittedly, this does not always succeed and then this has to be said. Why the long preface? Quite simply, I don't want it to seem like I'm just jumping on the bandwagon of those who almost gleefully don't have a good hair to say about the musical adaptation Cats. Because this film doesn't deserve to be torn apart from top to bottom - even if it is anything but good. The sets and decor alone are really well done and offer some convincing spectacle. And the cast - with a few exceptions - is really impressive. So what's the reason that Cats still doesn't really want to work?

It can't be the story. Because that the film would have no plot in the classical sense, should surprise now really nobody. After all, that was already missing from the musical template. Loosely based on the book Old Possum's Book of Practical Cats by T.S. Eliot, Cats tells of a bunch of cats, the Jellicle Cats, who meet once a year for the Jellicle Ball, at the end of which one of the cats is chosen to be reborn. Victoria, a young street cat, witnesses this event for the first time. The viewer accompanies her as she is introduced to the cats who may end up being the chosen one.

Yeah, there's not much more to say about the plot. Criticizing this rudimentary framework is as pointless as picking on the songs. After all, they are a matter of taste. But unfortunately, there are some aspects of this film version that can't be improved upon. First and foremost is the design of the cats, which despite multiple revisions after extreme criticism in the trailers just looks creepy. In addition, the proportions are seemingly implemented completely arbitrarily: sometimes the cats look far too big for their surroundings, then again far too small. It just seems too visually inconsistent to work.

Then there are the acting performances. Some play weak, others try too hard. Rebel Wilson, for instance, even as a cat, plays the exact role she plays in every other movie. It's no longer funny, it's just embarrassing. And newcomer Francesca Hayward may be a great ballet dancer, but her acting skills are limited to facial expressions that are just annoying after a few moments. On the other hand, there are great actors like Ian McKellen, whose acting seems silly at the latest when they have to snarl or meow. And when Jennifer Hudson sings Memories with a give-me-the-Oscar intensity, with snot even running out of her nose from the fervor, it unfortunately seems almost ridiculous in light of the cat design.

Overall, Cats feels like it was only made in this form because it's now technically possible, but not because there's any real artistic vision behind it. The animated cat fur may be great animation, but just because it can be done doesn't mean it has to be done. Still, of the musical adaptations that have hit theaters in 2019, Cats isn't the worst. I think I've Never Been to New York is even worse for one simple reason: in that case, they've strayed so far from the stage version that everything that actually made the musical so successful has completely disappeared. Cats, on the other hand, sticks very close to the successful original and tries to make it even bigger and more visually stunning. Thus, the film is at least worth seeing for very big fans of the musical. If you don't know the stage version or if you don't like musicals anyway (or if you don't like people dressed up as animals or animated like me), you should rather stay away from this movie!

Another info about the German version: Here not only the (few) dialogues but also the songs were dubbed, which is unfortunately very obvious. If you want to see stars like Taylor Swift or Jason Derulo not only (as cats), but also hear, you can not get past the original English version!

Cinema trailer for the movie "Cats (USA/Großbritannien 2019)"
Loading the player ...