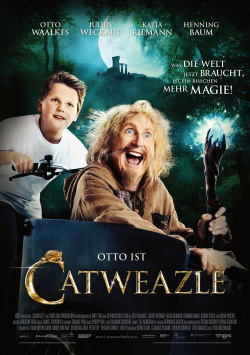 Magician Catweazle (Otto Waalkes) has a problem: after failing to present his king with a spell that turns night into day, he must flee from the ruler's henchmen. In the process, a spell lands him in our time. In the process, he foolishly loses his magic wand, which is found by 12-year-old Benny (Julius Weckauf). But Catweazle needs the wand to get back to the 11th century, where he must prevent a disaster at all costs. Benny would love to give the oddball magician his staff back, but it has since been snatched up by the rapacious art expert Dr. Metzler (Katja Riemann). The boy and the old magician have little time to get the precious staff back, otherwise Catweazle must remain in the present forever...

To this day, the 70s BBC series "Catweazle" starring Geoffrey Bayldon in the title role is an absolute cult for many. Even if the series just from the narrative pace today so no longer corresponds to the viewing habits of the target audience, the series by Richard Carpenter works even after half a century really good. Nevertheless, after 50 years, nothing speaks against a new film adaptation. This one, however, doesn't come from the UK, but from Germany, where the original has many loyal followers. Otto Waalkes has been signed up to play the lead role, and he also worked on the script.

In order to get the rights to the material, the heirs of Richard Carpenter had to be convinced that the story was in good hands with Sven Unterwaldt, who had already directed the "7 Dwarfs" films with Otto. In his version, the filmmaker sticks closely to the original story, at least in its core. But to meet audience expectations, this "Catweazle" also had to become a typical Otto film. For some, that is the film's great strength; for others, that is exactly what will be its greatest weakness.

Because when the movie poster reads: "Otto is Catweazle" it doesn't really say that. Because Otto is Otto - even if he looks like Catweazle. Otto never disappears behind his roles, but always makes them his own. While this gives his fans exactly what they expect from an Otto movie. At the same time, it takes away the opportunity for the characters to develop out of the Otto shadow. So you know from the start what you're going to get when it says Otto Waalkes. If that doesn't bother you, you'll get a nice family film here that entertains well with plenty of kid-friendly humor and some small moments of suspense. The cult potential of the series is never reached, but the comedy offers good entertainment. Therefore, if you like Otto and are looking for an entertaining children's film, this remake of "Catweazle" is well worth seeing!

Cinema trailer for the movie "Catweazle (Deutschland 2020)"
Loading the player ...