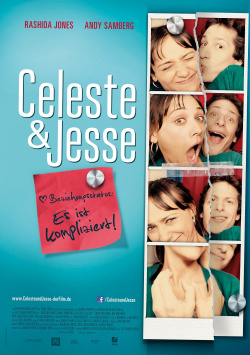 Actually, Celeste (Rashida Jones) and Jesse (Andy Samberg) have the perfect relationship. They have the same sense of humor, can talk about anything, and just love spending time together. However, the two are not a couple. More precisely, not anymore. Because even though Celeste and Jesse ended their marriage months ago, they still live door to door and enjoy just being best friends. But eventually, their friends Beth (Ari Graynor) and Tucker (Eric Christian Olsen) have a meltdown. They find the interaction between the two ex-partners just not normal. After this telling off, the former couple also starts to wonder. And when Jesse actually gets involved in his first date with another woman (Rebecca Dayan), the friendly carefree facade between the ex-couple begins to crumble. But drawing a final line is harder for Celeste and Jesse than they thought.

Celeste & Jesse is a nice romantic comedy that varies many familiar clichés of the genre in a refreshing way, making for some very original moments. Of course, the wheel isn't reinvented here. Nevertheless, director Lee Toland Krieger manages very well to present old familiar things in a quite original and above all very charming way. The script was written by leading actress Rashida Jones, daughter of music legend Quincy Jones and actress Peggy Lipton (Twin Peaks), together with supporting actor Will McCormack. The two not only share a close friendship. They were also in a relationship for a short time a few years ago. So naturally, they are just predestined to write a story like this. Their book is full of nice little ideas and dialogues that somehow seem to be taken from life.

It takes a little while for the story about friendship, love, and letting go to get going, though. It's not entirely apparent if that's because of the script or if the production simply lacks pace and effervescence in the beginning. But even if the beginning only leads us to expect moderate entertainment, the action soon picks up considerably and then also has a lot more wit, charm and emotions than it does at the beginning. It's true that especially in the second half of the movie there are a couple of small lenghts and it takes a bit too long until the story gets to the very predictable point. But that doesn't matter too much in the end, because the positive aspects dominate.

One of these positive aspects is clearly the likeable cast. The chemistry between Rashida Jones (Best Man Wanted, Parks & Recreation) and Andy Samberg, known from the comedy show Saturday Night Live, is absolutely coherent and as a viewer you take their intimate friendship in every second. And also the supporting actors, especially Emma Roberts as a bitchy pop starlet, Elijah Wood as Celeste's gay colleague and also Will McCormack as a crazed Skillz, fit perfectly into the amusing action.

Celeste & Jesse is, of course, not free of clichés and minor flaws. But the film has one thing going for it besides its likeable cast: a whole lot of heart. And that weighs in the end together with the fact that Krieger avoids every kitschy cliff with a sure hand, positive enough to recommend this nice film to all lovers of romantic comedies that don't just follow the very conventional paths. Worth seeing