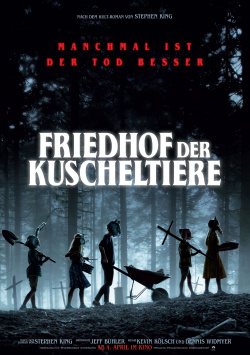 Graveyard of the Cuddly Animals

When Dr. Louis Creed (Jason Clarke) moves to the country with his wife Rachel (Amy Seimetz) and their shared children Ellie (Jet&eacute; Laurence) and Gage to take a job as a doctor at a university, he is convinced that a tranquil life now awaits them. But it's not just a student's fatal accident that shatters the supposed idyll. The pet cemetery, which is located on the Creeds' large property, also emanates an eerie atmosphere that haunts Louis even into his dreams. When Ellie's cat is run over, Louis asks his neighbor, the Jud (John Lithgow), for help and is led by the old man to an ominous place that unleashes a power that shows in a particularly gruesome way that death is not always the end.

Cemetery of the Cuddly Animals is undoubtedly one of Stephen King's best-known and most popular works. Having been adapted into a film back in 1989, the bestseller has been the subject of repeated plans to bring a remake to cinemas in recent years. For some time it even looked like George Clooney would take the lead role. But nothing came of it and the project seemed dead - until King adaptations experienced a true renaissance due to the enormous success of It. The directing duo Kevin Kölsch and Dennis Widmyer, who already gained genre experience with the thriller Starry Eyes and the series version of Scream, have changed the story a little bit, especially in one aspect, which is already revealed in the trailer. Overall, however, keep until shortly before the end quite close to the template and its first film adaptation. The latter is especially evident in a scene where they play directly with the expectations of the audience, who are familiar with the first adaptation, and achieve a really good shock effect.

Overall, it can be said: The new film does some things better than the first film adaptation, while other things seemed much more effective in the '89 version. But neither film ultimately comes close to the book. First of all, the aspects that are convincing here: there are the actors, all of whom are clearly superior to the ensemble of the first film. As entertaining as Mary Lambert's version was, she didn't deliver top-notch performances acting-wise. Dale Midkiff and Denise Crosby showed little more than facial expressions, and Fred Gwyne really didn't deliver anything Oscar-worthy either. Just Jason Clarke and John Lithgow, but also the young up-and-coming actress Jet&eacute; Laurence do that much better.

Also the whole atmosphere is a bit more depressing and gloomy in the new version. Some really good scary moments can unfold in this. But there are also aspects that ruin exactly that: There are, for example, the scenes that show Louis on his way to the old Indian cemetery. This was so obviously shot in the studio that as a viewer you are completely ripped out of the story. Unfortunately, the special effects team completely failed here. The other disappointment concerns the scenes with Rachel's sister Zelda. Those were among the scariest moments in the '89 film version, but here they're too trimmed for shock that they don't scare, but almost seem involuntarily comical.

There are other drastic differences, especially concerning the horrific accident and the ending. But these changes actually work quite well. For me as a loyal King fan, the new adaptation of Graveyard of the Cuddly Animals was therefore more successful entertainment than disappointment - even if this still spread in some moments. Still, this review can't be entirely positive, as the filmmakers left too much potential unused. So the whole thing has become a decent horror film, but can not play in the upper league of King adaptations. Worth seeing!

Cinema trailer for the movie "Graveyard of the Cuddly Animals (USA 2019)"
Loading the player ...