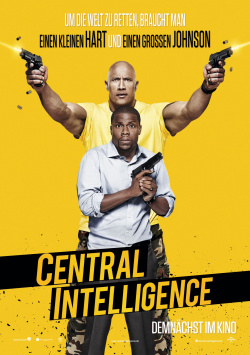 You might not think so now, but once upon a time Bob (Dwayne Johnson) was a real, overweight nerd at his school who was trampled on by everyone. Now, at a class reunion, the muscle-bound CIA agent wants to show that those days are long gone and that he won't be embarrassed in front of the assembled school anymore. But before he can do that, he contacts the only classmate who didn't bully him: former King of Campus Calvin (Kevin Hart). He's now a desk jockey and only dreams of the popularity he once had. But now accountant Calvin is supposed to use his knowledge to help Bob stop a dangerous deal. And before he knows it, Calvin is in the middle of a turbulent espionage adventure, dealing not only with trigger-happy gangsters, but even more dangerous CIA agents who think Bob is a traitor.

With Central Intelligence, director Rawson Marshall Thurber (Full on Nuts) provides his two leads, Dwayne Johnson and Kevin hart, with the perfect vehicle to play to all the strengths of their current popularity. While Kevin Hart, as in most of his films, is really just playing Kevin Hart again, Dwayne Johnson gets to deliver an amusing mix of punchy muscle play and unrestrained over-the-top silliness. The fact that he obviously had a lot of fun making fun of his own image actually consoles over some weaknesses of the film.

Because to be quite honest: A really good film is Central Intelligence not. The story is relatively flat and predictable (especially when it comes to the identity of the real traitor), there are some very obvious connection errors like magically appearing motorcycle helmets, and the humor is silly, raunchy, and happily served with a sledgehammer in the process. Even the small guest appearance by a currently very popular actress is no real surprise - and especially not a particularly original idea, since she's just in the movies far too often these days. All this should actually lead to the fact that this turbulent buddy-comedy is a total cinematic failure.

However, a decent entertainment value can't be denied to the film, as well as some really funny gags. And even though it's all been so obviously contrived, the good chemistry between Dwayne Johnson and Kevin Hart is extremely infectious and ensures that even some humorous pipe dreams still provide a hearty laugh. Therefore, for those expecting a clever comedy with depth, this film is more of a crime. However, if you like the two main actors and can laugh at silly brachial action comedy, Central Intelligence can definitely be recommended to you. Worth seeing