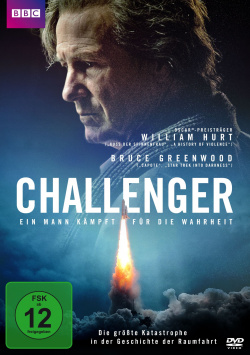 Film: With the launch of the US Space Shuttle Challenger in January 1986, another milestone in the history of manned spaceflight should be set. But only 73 seconds after the start there is a catastrophe: The shuttle explodes and the entire crew dies. The whole of America falls into a state of shock after this accident and US President Ronald Reagan knows that he must offer his voters a complete explanation. A commission of high-level government officials and scientists will therefore be set up to lead a comprehensive investigation. The physicist and Nobel Prize winner Richard P. Feynman (William Hurt), who unlike his colleagues does not shy away from asking unpleasant questions, will also be there. In the process, however, he repeatedly encounters a wall of silence, contradictions and half-truths. It becomes clear that there are some people at NASA who do not want the true cause of the accident to be found. But for Feynman this is a good reason to keep searching for the truth…

With "Challenger" the BBC has staged an exciting reappraisal of the tragic shuttle catastrophe, which largely adheres to the results of the investigation commission to which Richard P. Feynman belonged. Of course, the movie has taken some dramaturgical liberties to build up some more tension. But on the whole, the drama can be seen as a factual report. The investigation work is a relatively dry affair. Long conversations, tours of factories and research facilities and fierce discussions between the individual members of the commission - all this does not necessarily sound like the stuff of exciting entertainment.

Although not really much more happens, director James Hawes succeeds very well in captivating his audience to the action and in the course of the almost 90-minute playing time hardly allowing any noteworthy lengths to arise. Hawes doesn't only manage this with the coherent script, but also with his very good lead actor William Hurt, who also delivers some dry dialogues in a thrilling way. All in all, "Challenger" follows the tradition of classic conspiracy thrillers such as "Silkwood". And even if their quality is not quite reached, the TV movie offers very good and exciting entertainment, which also makes you want to get to know the true background of the story in more detail. Worth seeing!

Picture + Sound: The DVD image is absolutely clean and has a good overall sharpness that only has small weaknesses in darker scenes. Here some moments seem slightly blurred and smaller details are often lost. The colouring is very warm and looks pleasantly authentic. The German soundtrack is available in a Dolby Digital 2.0 mix, which remains rather reserved over long distances. Only seldom does very clear movement occur in the surround channels... However, this also fits in with the overall staging, which is more dominated by dialogues, and therefore doesn't really carry any negative weight. Good.

Extras: Except for program tips from the provider, the DVD has no bonus material to offer.

Fazit: "Challenger" is an exciting television film that portrays the difficult investigative work after the Challenger catastrophe in a very factual, but nevertheless stirring way. The fact that the movie works is not least due to William Hurt's convincing game, whose very authentic play adds even more intensity to the already thrilling (because true) story. The DVD presents the film in a picture and sound quality on a good TV level. Unfortunately, there is no bonus material, which is really a pity in view of the topic. Nevertheless, the film is good enough to speak as an argument for the purchase of this disc. Recommended