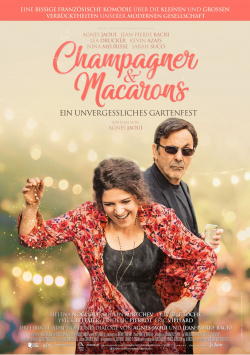 Successful television producer Nathalie (L&eacute;a Drucker) invites everyone to a garden party at her new residence and everyone comes: Her brother-in-law, television host Castro (Jean-Pierre Bacri), Natalie's sister, and Castor's ex H&eacute;l&egrave;ne (Agn&egrave;s Jaoui), who only has her next refugee project on her mind, and Nina, the daughter of the two, who has just finished writing her second novel, in which her parents don't exactly come off well. In between, there are YouTube stars, bon vivants, poseurs and a waitress who cares more about selfies with guests than serving them. It's an explosive mix, and it doesn't take long for more than just the champagne corks to pop.

Multi-award-winning actress and director Agn&egrave;s Jaoui lays down the law with Champagne &. Macarons - An Unforgettable Garden Party, a light comedy that is somewhat reminiscent of Olivier Nakache's Life is a Feast and &Eacute;ric Toledano (Pretty Best Friends) in terms of mood and dramaturgy. But while that film boasted some wonderfully drawn characters, many well-done gags, and charm, there is little of that in Jaoui's film. The characters, who too often burst into song for far too long, aren't really likeable and their conflicts are too superficially fleshed out. This was also the case with Life is a Feast, but there was never such an obvious attempt to give it some depth as well.

The imagery is engaging and Jaoui also succeeds very well in transferring the atmosphere of the garden party to the audience. But what good is that if you just don't care about the characters and their stories. Sure, there are some very amusing moments and also some aspects of the story that have the potential to make the audience reflect. Nor can the actors, who are well chosen across the board, be blamed for the fact that the film just doesn't quite want to work.

Much more, this is solely due to the weak script and a production that lacks esprit, pace and charm in the crucial moments. A nice garden party, which one would like to escape, however, at the latest after one hour easily unnerved. Therefore only worth seeing with cutbacks!

Cinema trailer for the movie "Champagne and Macarons - An Unforgettable Garden Party (Frankreich 2018)"
Loading the player ...