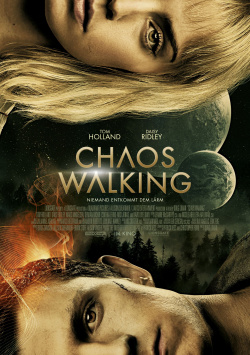 In the future, humans have left Earth to start over on the planet "New World". This is also where young Todd Hewitt (Tom Holland) lives in the settlement of Prentisstown. There are no women here, as they were killed by the aliens living on the planet. The men who survived are surrounded by what is called "noise" - a mysterious force that makes all their thoughts audible to everyone. This proves extremely uncomfortable, and not just in everyday life, unless you can control your thoughts. The "noise" becomes especially awkward for Todd when he finds a young woman, Viola (Daisy Ridley), who has crashed her spaceship over "New World". To the mayor of Prentisstown (Mads Mikkelsen), the woman poses a real threat. But Todd is convinced that he must help her. Together they flee from the mayor and his men, and in the process uncover a truth that shakes Todd's entire worldview....

"Chaos Walking", the film adaptation of the first volume of Patrick Ness' bestselling trilogy, brings director Doug Liman back to the sci-fi genre after "Edge of Tomorrow". While the alien invasion in the "Edge of Tomorrow"-variant had an extremely high entertainment factor, one looks for this in the youth book adaptation this unfortunately for long stretches in vain. No question: The film looks good. The set and effects are absolutely convincing and create an engaging mix of futuristic dystopia and classic western. The visual realization of the "noise" is very cleverly and convincingly done, though the constant presence of the men's thoughts is a bit annoying after a few minutes - especially since Todd stammers around arguably frantically in his attempts to express his thoughts in front of Viola, not only with his mouth but also with his head.

In itself, "Chaos Walking" has a lot going for it: A strong ensemble, a good director, engaging visuals, and a story that is exciting at its core. Why the result then comes across as rather dull and never really grabs you is hard to grasp. It may be because the entire plot feels like exposition, building up a lot without really telling much. And when even great actors like Mads Mikkelsen tend to pale, something is very wrong.

I can't say that I found "Chaos Walking" really bad. I really liked the look of the movie and didn't really want to like it just for that reason. However, after only a few minutes, I just didn't care for the story or characters. In view of the rather mediocre success and mixed reviews, it is right to doubt that the other two volumes of the novel trilogy will be filmed. Unfortunately I have to say: It wouldn't really be a pity. Not a complete failure, but overall rather disappointing and therefore only: Worth seeing with restrictions!