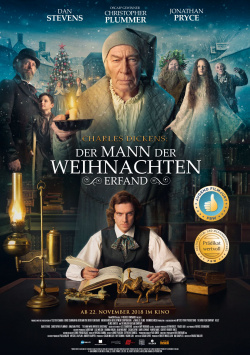 With works like Oliver Twist, Charles Dickens (Dan Stevens) has made it to fame, reputation and fortune. Unfortunately, his last few books have not been great successes, so it is becoming increasingly difficult to provide his growing family with the good standard of living they are used to. A new book is needed. A book that will excite the masses. So Dickens has an idea: how about a Christmas book? Too bad he only has a few weeks to get the book into the stores in time. And he still lacks a suitable story.

Charles Dickens: The Man Who Invented Christmas is a mix of biopic and reimagining. Because really, the film is just telling a variation of Charles Dickens' Christmas Carol - only with Dickens himself as the main character. Blurring the lines between reality and fiction to retrace the creation of one of the most beautiful Christmas stories is a nice idea. With Dan Stevens, a leading actor was found who embodies the fine line between genius and madness very well. And Christopher Plummer is great as always as Scrooge.

But unfortunately that's where the positives end. The movie seems more like a not-really-expensive TV production that never really lives up to its potential. The whole thing is neither really funny, nor really exciting. Neither really opulent, nor thrillingly staged. Not really bad, but not really good either. The actors make an effort, here and there the whole thing is quite fun. But the bottom line remains a strange emptiness that spreads instead of the hoped-for Christmas spirit.

This may be because the film is too hysterical and darkly directed in stretches. Director Bharat Nalluri has cleverly avoided giving the audience a big treat - quite different from what Dickens had in mind. Then rather the Muppets Christmas Story with Michael Caine as Scrooge. At least that one is fun and leaves a festive mood, which one looks for in vain here. That's why I only give it one: Worth seeing with clear cutbacks

Cinema trailer for the movie "Charles Dickens: The Man Who Invented Christmas (Irland 2017)"
Loading the player ...