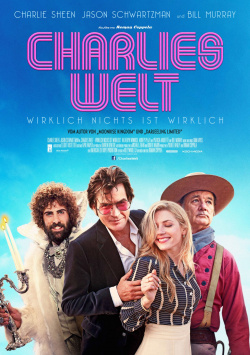 Success-addled graphic designer Charles Swan III (Charlie Sheen) has enjoyed life to the fullest so far. But when he meets the attractive Ivana (Katheryn Winnick), his bad boy days seem well and truly over. But when Ivana meets the attractive Charles (Katheryn Winnick), his bad boy days seem to be over for good. Too bad Ivana can't really get along with Charles' busy past and after she discovers one of her photos in the drawer with the pictures of all his exes, this is reason enough for her to leave Charles. He then falls into a deep crisis that sends his car into a strange pool and himself to the hospital. There he begins to question his life so far and to embark on a search for a deeper meaning in his life. With the help of stand-up comedian Kirby (Jason Schwartzman), his manager Saul (Bill Murray), and his sister Izzy (Patricia Arquette), Charles hopes to not only get his life back on track at the end of his self-discovery trip, but also win Ivana back.

Through his various escapades, Charlie Sheen seems almost predestined for a film like Charlie's World. The story, if it can be called such, then reads like a very self-deprecating look at the various scandals that have been in the tabloids about the former Two and a Half Men star in recent years. Also, the fact that Roman Coppola has shown a knack for whimsical and original comedy as co-writer of Wes Anderson's films Darjeeling Limited and Moonrise Kingdom actually sounds very promising. And with supporting actors like Bill Murray in a delightfully quirky role, surely nothing could go wrong?

Well, far from it! Charlie's world has some quite funny and original ideas to offer, but the film as a whole is a completely confused collection of absurdities that try too hard to be different and whimsical, but above all are not one thing: funny. Charles, bathing in pure self-pity, quickly gets on the nerves of even the biggest Charlie Sheen fans with his whining. In addition, Coppola is consistently off the mark with his comedic timing. Instead of focusing on staying as far from the mainstream as possible, the filmmaker should have focused on the pacing of his production in some moments. Because some scenes drag like chewing gum, so that ideas, which would be quite nice and amusing in themselves, are completely ridden to death.

But it would be too easy, if it could be blamed only on the wrong timing that Charlie's world does not work. Rather, the main determining factor is that Roman Coppola simply didn't write a very good script. It's simply not enough to put some fun and quirky ideas down on paper, you should also tie them together with a story that's interesting in whatever form and make its characters at least somewhat sympathetic. But Coppola sadly fails to do all that.

Even at the beginning, you desperately want to like the film, want to read some genius into the quirky moments that you recognize but don't understand. Cleverly, one is led to believe in pretensions, where in reality there is nothing but outright nonsense to be found. So it's not surprising that the film got the worst rating ever in a sneak preview in a Frankfurt cinema. Despite the many good intentions and the great talent of all involved, there can be no other rating for this work, even with the best will in the world, than a very conditionally worth seeing even for die-hard Charlie Sheen fans!