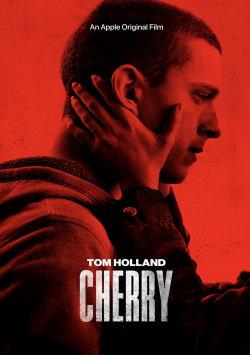 Cherry - The End of All Innocence

When his girlfriend Emily (Ciara Bravo) tells him she wants to move to Canada, a young college student (Tom Holland) has his world crumble and enlists in the military. After his training, he is sent to Iraq, where he is nicknamed Cherry as a medic. Here he experiences an unimaginable horror that won't leave him even after he returns. Actually, he wants to start a new life with Emily by his side. But the images from the war mission won't let him go. Cherry tries to escape them by taking drugs, but this only makes his misery worse - especially as he drags Emily into it too. Soon he is faced with nothingness and is left with only one way out: a bank robbery...

With their latest directorial effort, brothers Anthony and Joe Russo have delivered nothing less than one of the most commercially successful films of all time. Their superhero epic "Avengers: Endgame" is now followed by the drama "Cherry - The End of All Innocence", based on the autobiographical novel by Nico Walker. The Russo brothers' new film has little in common with the great popcorn cinema from the Marvel universe. The directors mix numerous film genres and stylistic devices together here, which makes the film always exciting and surprising - at least on a stylistic level - despite its running time of almost two and a half hours. Colouring, image format, narrative perspective - the Russos change all that here again and again. What starts out as a fairly conventional romance first turns into a brutal war film, which then mutates into a tangible drug drama.

The film doesn't really present a consistent picture. It feels a bit like the Russo brothers went all out creatively. On the other hand, the mix of styles works quite well. After all, individual stages of Cherry's life are highlighted (it's not for nothing that the film is divided into individual chapters), which are connected, but are very different in themselves. Still, it's not easy fare. True, there are always lighter, almost amusing moments. Overall, however, the film is brutal, rough and full of dreariness, and then there's the occasionally exhausting, jumbled narrative.

You have to be willing and able to engage with it in order to recognize and appreciate the many positive aspects that "Cherry - The End of All Innocence" has to offer, despite all the justified criticism. Tom Holland's performance, for instance, is really strong, but might come across a bit too strained to viewers who don't find access to the film. But no matter if you discover a certain genius in the dramaturgically as well as stylistically slightly overloaded movie or if you are not picked up by it at all, you have to hand it to Anthony and Joe Russo: The two have not rested on their laurels and have not simply copied the successful concept of their previous films. Whether what they have directed for Apple + works in the end, may be in the eyes of the beholder.

Fact is, however, that the directors, but also their main actor have evolved with this film - and that is already more than commendable. And although I personally found the film a bit tiring, especially in the second half, and I was only emotionally picked up in isolated scenes, I think the artistic intention behind the work is absolutely successful. And therefore, despite some weaknesses, the bottom line is still a satisfied: worth seeing!

"Cherry - The End of All Innocence" is now available on Apple +.