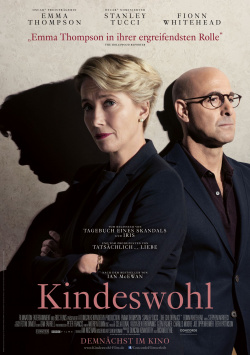 Family Court Judge Fiona Maye (Emma Thompson) lives for her job, which has earned her immense respect, but which has also caused her marriage to Jack (Stanley Tucci) to suffer. And just when a tangible crisis is looming in her personal life, Fiona is assigned an extremely difficult case: Seventeen-year-old Adam (Fionn Whitehead) has leukemia. He will die if he doesn't get a blood transfusion as soon as possible. But he and his parents, as devout Jehovah's Witnesses, refuse. Since Adam is not yet of age, Fiona is now to decide whether he may be treated against his will. In order to make a decision, she visits the boy in the hospital and has an intense conversation with him. This leads to a decision that will permanently change not only Adam's life, but also Fiona's.

Child's Welfare is the film adaptation of the novel by Ian McEwan (Apology), who adapted his book himself for the movie version. It was directed by Richard Eyre, who has already shown a good hand for gripping dramas with Diary of a Scandal or Iris. His latest film has two very strong aspects to offer that make it worth watching despite some minor criticisms. The first aspect is Emma Thompson, who delivers a truly great performance. As a woman who has to put rationality over emotionality in her job in order to make the right decisions, while also losing sight of emotion in her marriage, Thompson is just great.

There are moments when Fiona visibly struggles to keep her true feelings from surfacing. Outwardly she keeps her composure, but in her facial expressions it's clear the inner struggle she has to fight in the process. It's in moments like these that it becomes clear what a good actress Emma Thompson is. The rest of the ensemble takes a bit of a back seat, but Stanley Tucci and Fionn Whitehead in particular always manage to step out of Thompson's shadow and give performances that are no less good.

The second strong aspect is the story itself, which is not only emotionally very stirring, but also provides much food for thought and discussion. How far is free will allowed to go? At what point is a person allowed to make their own decisions about their life? But there is much more at stake. Can a person who has spent his life in a certain religious dependency, which he may have perceived as protection, really be free and happy? And is Jack's reaction to Fiona's emotional detachment brash, excessive, or perhaps perfectly understandable and sympathetic.

There's a lot about Child Welfare to ponder long after the credits roll. Even though there are some moments that seem a bit contrived, I don't think the drama really leaves anyone cold. And that's exactly what leads to a very clear conclusion in the end: Absolutely worth seeing!