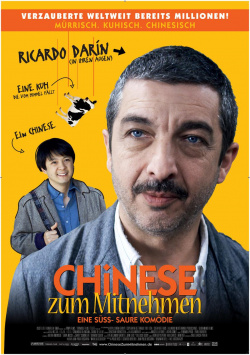 The life of notorious loner Roberto (Ricardo Darin) is governed by clear rules and a general mixture of dislike and distrust of other people. Every day he turns out the lights at exactly the same time, and when he orders packs of 200 screws for his small hardware store, they are naturally counted first. Only his penchant for bizarre stories, which he collects from various newspapers and carefully files away, seems to give him anything resembling pleasure. One day, as he is enjoying his well-deserved lunch break near the airport, he unintentionally becomes part of such a strange story himself. Because there he meets the young Chinese Jun (Ignacio Huang), who was robbed right after his arrival in Argentina and now, without even being able to speak a word of Spanish, is desperately looking for his uncle. Disgruntled, Roberto takes on the Chinese man, and before he knows it, his clearly ordered life is completely turned upside down...

Chinese to Go is a comedy of rather quiet tones that hides beneath its quiet surface plenty of bite, a heavy dose of black humour and a whole lot of heart. Lead actor Ricardo Darin, known from the Oscar winner In Their Eyes, is simply perfectly cast as the grumpy Roberto. He makes sure that the loner, despite all his quirks and his not always very nice behavior towards other people, doesn't come across as unsympathetic. On the contrary, it's just fun to watch Roberto try with all his might to keep his clear structures and how he always gets upset about the people around him.

Darin's portrayal makes it clear through small nuances that there is no malice behind Roberto's behavior, but an all-dominating sadness and an inability to show emotions towards other people. Of course, this makes it all the more beautiful to watch how his encounter with Jun seems to slowly but surely change him. However, director Sebastián Borenzstein skilfully avoids letting the story be overrun by kitsch or clichés. When he does use clichés, it's only to show Roberto's stubbornness and his prejudices, and then gradually turn them into the opposite.

It should probably come as no real surprise that Roberto ends up no longer being the man the audience meets at the beginning. But the manner in which this transformation occurs, as well as its scope, then elevate this charming comedy far above the average. Borenzstein manages to add plenty of originality to a story that is not really surprising in itself, so that the viewer never gets bored or feels like he has seen this film dozens of times before.

The interplay between the two main characters, the endearing story and the well-balanced mix of humor and emotion make Chinese to Go a real must-see for all lovers of subtle arthouse comedies. A quiet film, in which nevertheless the cow flies right at the beginning - someone should try to imitate this director! Absolutely recommendable!