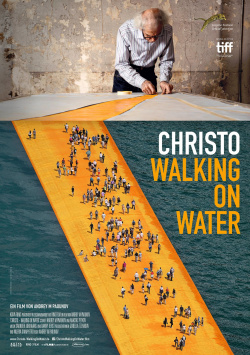 Almost ten years after his last major installation, The Gates, in New York`s Central Park, artist Christo, who had taken a bit of a step back after the death of his wife and artistic partner Jeanne-Claude in 2009, returned to the public eye with a new, spectacular art action. The Lago d`Iseo, a small lake between Lake Como and Lake Garda, was to be the backdrop for The Floating Piers. Christo and Jeanne-Claude had the idea for this installation as early as 1969, but at the time it could not be realized. That was about to change. After the site for the installation was selected in spring 2014, a process of around two years began until the event was presented to the public from 18 June to 03 July 2016, attracting 1.2 million visitors to walk safely across water for once.

Filmmaker Andrey Paounoy has captured the creation of The Floating Piers and the actual event in the rousing documentary Christo - Walking on Water. From 700 hours of film material, a unique insight into the work of an exceptional artist has been achieved, which is refreshingly honest and shows Christo not only as a genius, but also as a very difficult, headstrong person. The viewer gets an exciting insight into the creation of a fascinating installation, which threatened to fail more than once due to big egos, overtaxed authorities and the vagaries of the weather. The fact that not only the beautiful and fascinating images are shown here, but also the dark side is given space, makes this film not only for admirers Christos to a great documentary.

It is simply interesting to watch how from quite normal logistical processes something is created, which fascinates millions of people. How much effort goes into staging something truly dreamlike for a brief moment. But it is also exciting to learn that Christo was on the verge of cancelling the action because the authorities were not able (or willing) to keep the streams of visitors under control during the first days. In all of this, not only Christo is accompanied, but also the people around him, without whom such projects could not be realized - and who sometimes have to have the patience of an angel to be able to put up with the artist's waywardness.

Christo - Walking on Water is a very entertaining and extremely interesting documentary that shows how the ideas of a single person can enchant and inspire millions. Great snapshots and fascinating images then make this film: absolutely worth watching!

Cinema trailer for the movie "Christo - Walking on Water (Italien/USA/Deutschland 2018)"
Loading the player ...