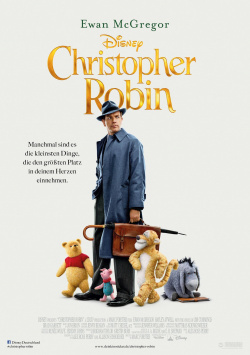 As a child, Christopher Robin had some very special friends with whom he had quite a few adventures in the Hundred Acre Wood. But then the boy had to move away, went to boarding school, went to war and now lives in London as a grown man (Ewan McGregor). His childhood, spent with Winnie the Pooh and his friends, is only a distant memory, a fantasy that had to give way to real life. But suddenly Winnie the Pooh shows up in London and asks Christopher Robin to help him find his friends again. Reluctantly, he follows the teddy into the Hundred Acre Wood, where for a few precious moments he is reminded of what is really important in life. But that's exactly what gets him into real trouble at his job, which is why Winnie the Pooh, Piglet, Eeyore, and Tigger decide to leave their beloved forest to bail out their friend.

Christopher Robin's second film this year focuses on the boy made world famous by his father A. A. Milne's Winnie the Pooh books. But while Goodbye, Christopher Robin dealt with the real-life character and the loss of a childhood, this Disney production follows the fictional stories that began in 1966 with the first animated short, Winnie the Pooh and the Honey Tree. Director Marc Forster, who previously filmed a not dissimilar subject matter with When Dreams Learn to Fly about Peter Pan author J.M. Barrie, got to bring the beloved denizens of the Hundred Acre Wood to life in a live-action film for the first time.

The result is beautiful, charming film that ultimately falls short of its potential, especially on an emotional level. There's no question that there are some very funny moments, as well as some very beautiful ones. Winnie the Pooh and his friends are wonderfully animated, so they really do seem like old stuffed animals brought to life. And the human actors like Ewan McGregor and Hayley Atwell are also quite convincing. All well and good. But what the film ultimately suffers from is its very ponderous staging, which not only results in some really tedious lengths. It also prevents the audience from being really emotionally carried away.

Furthermore, the story - which Steven Spielberg strictly speaking already told in Hook - is not really aimed at children, who are used to a very different narrative pace these days anyway. Rather, Christopher Robin is more of a film for adults to be reminded of how special it is to be a child and see the world through the innocent eyes of a child. Marc Forster has made a really nice film, but somehow he has directed it past a clear target audience. A little less predictable family drama and a little more insight into the world of the Hundred Acre Wood might have done it some good. Thus, the film, which should have strained the tear glands and laugh muscles from the first minute on, is nothing more than a charming pastime, which, however, can't leave a real impression. Therefore, there are only with small deductions a: Worth seeing!