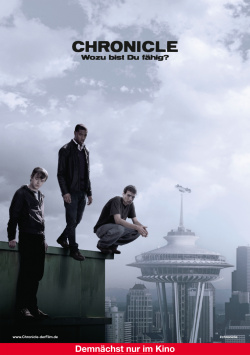 Chronicle - What Are You Capable Of

With the huge success of The Blair Witch Project, a new sub-genre was born that enjoys great popularity, especially in the horror subject: the so-called found footage film, which shows supposedly authentic footage discovered somewhere. Whether [rec], Cloverfield, Apollo 18 or last but not least the enormously popular Paranormal Activity series, again and again filmmakers used the supposedly realistic style sometimes more, sometimes less effectively to surprise, scare and entertain the audience at its best. But as is often the case with a smaller subgenre like this one, it wears thin over time. But found footage films should not be buried yet. Because as Josh Trank proves with Chronicle, you can still find new sides to this kind of filmmaking.

The superhero thriller of a different kind tells the story of teenager Andrew (Dane Dehaan), a loner who mostly looks at life through a video camera. When he explores a strange hole in the ground one night with his cousin Matt (Alex Russell) and his buddy Steve (Michael B. Jordan), the three of them literally suffer a film tear. A short time later, they discover that they suddenly have telekinetic abilities. At first, they get a kick out of the ability to move things using only their minds. And Andrew, for the first time in his life, feels like he is special and has real friends. But as their powers grow stronger, Andrew seems less and less able to keep control of his behavior. And soon the situation threatens to escalate dangerously...

In the beginning, it seems like Josh Trank is just using common clichés. The three main characters are introduced to the viewer as rather one-dimensional stereotypes and the story also moves along fairly well-trodden paths in the first few minutes. However, this changes drastically once the three boys gain their superpowers. At first, the three boys behave exactly the way any teenager would probably behave if they discovered supernatural powers about themselves. They experiment around, allow themselves some jokes and gain enormous self-confidence in view of their newly acquired abilities. But the fact that this can soon degenerate into dangerous cockiness makes for a great build-up of tension after the rather ponderous beginning. Andrew in particular, who has often been teased by his classmates, beaten by his father and who has to watch his mother struggle with death, changes drastically as a result of his powers, making him without question the most interesting character in the film.

It was a good idea by Trank to establish right at the beginning that Andrew often likes to record things with his camera. That way, it's clear that the boy at least knows his way around it well enough to keep the camera relatively still most of the time and, when he can move it later with the power of his mind, he also chooses the right camera angles to capture the action most effectively. This gives the film a very special look, especially in comparison to other works of the genre, which is much more bearable for the viewer due to the significantly reduced shaky-cam look than is the case with many other found footage works.

A very good impression is also left by the special effects, which have been implemented extremely well, especially in view of the relatively low budget (about 12 million dollars) with small cutbacks. Especially in the finale there are some spectacular moments to see, which need not hide behind the effects of much more expensive superhero films.

Whether as an original superhero film, as a coming-of-age drama or as a found footage thriller, Chronicle can convince all along the line. It may be that some viewers just the somewhat worn staged beginning comes across too long-winded and thus also depresses the entertainment value overall. But if you prefer story and characters instead of action and effects, you shouldn't miss this movie. Absolutely worth seeing

Cinema trailer for the movie "Chronicle - What Are You Capable Of (USA 2011)"
Loading the player ...