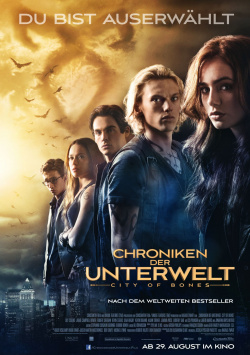 Chronicles of the Underworld - City of Bones

The enormous success of the film adaptations of Stephenie Meyer's Twilight novels started a veritable run on other fantasy book series that primarily appeal to a young female readership. But adaptations of Ruby Red, Souls or Beautiful Creatures have fallen far short of expectations at the box office, proving that success is not as easy to calculate as studio bosses would like. Now, another attempt to launch a successful film franchise for fantasy-loving teenage girls is coming to theaters with Chronicles of the Underworld - City of Bones, the film adaptation of the first novel in Cassandra Clare's Underworld saga.

And the adventures around young Clary Fray (Lily Collins) then begin very promisingly: on her 16th birthday, the girl wonders why she keeps drawing the same strange symbol. When she discovers the symbol above the door of a club, she spontaneously decides that she wants to celebrate her birthday there with her best buddy Simon (Robert Sheehan). But instead of a hilarious party, the club is a horror spot for Clary as she witnesses a mysterious man (Jamie Campbell Bower) murdering a woman. Even worse: she seems to be the only one who can see the man. When he introduces himself to her as shadow hunter Jace, who fights demons, vampires and other creatures in a parallel world of New York, Clary's hitherto orderly life is thrown completely out of kilter. She learns that she can only see Jace because she also has Shadowhunter blood in her veins. When her mother disappears and the brutal minions of the sinister Valentine Morgenstern (Jonathan Rhys Meyers) hunt Clary, the girl joins the small hunter troop around Jace. Little does she know the key role she will play in the fight against the evil forces of the underworld.

Director Harald Zwart, who had a big hit with the remake of Karate Kid, does a pretty good job of getting the story going. With a successful mix of fast-paced action, romance, fantasy and a little touch of humor, he immerses the viewer in a parallel world where werewolves, vampires, witches and demons roam the streets of New York. All that's really missing are the obligatory zombies - but as we learn from Shadowhunter Isabelle (Jemima West), they're pure fiction, unlike the other creatures. For the first hour, Chronicles of the Underworld - City of Bones is really fun, as long as you can manage to see past some of the clichés and campy dialogue. Admittedly, the three-way constellation Clary - Jace - Simon reminds a lot of Bella - Edward - Jacob and you can see the shirts with Team Jace or Team Simon printed on them in front of you when the teenage protagonists look at each other with wide eyes. And although the whole thing culminates in a sequence that's way too cheesy even for hopeless romantics, this dramaturgical element of the film works quite well. Because in the end it's not the romance that's in the foreground here, but an essential battle of good versus evil, which has been realized here with decent effects and a set worth seeing.

Also the actors do surprisingly well considering the rather weak script. Especially supporting actors like Aidan Turner (The Hobbit) or Godfrey Gao deliver convincing performances. These are then also largely responsible for the fact that the fantasy romance has a pleasantly entertaining start. However, this is slowed down in the second half especially by the fact that Jonathan Rhys Meyers doesn't have the necessary meanie charisma to make him a truly believable threat to the heroes. Moreover, Zwart fails to build on the good foundation he laid in the opening minutes and imbue the parallel world with the kind of magic and enchantment that made, say, Harry Potter's Wizarding World literally enchanting. Zwart's production only scratches the surface of what is possible, which is why the audience is hardly drawn into this fantasy cosmos. The ideas are there, but the execution is simply too ordinary and too unimaginative to make Chronicles of the Underworld - City of Bones anything special.

Nevertheless: the entertainment value is there and the film has enough points on its credit side to at least satisfy its intended target audience. Even if fans of the book will be bothered by some of the changes made for the film adaptation, the never really boring adventure, despite 130 minutes, offers exactly the ingredients you can expect from a story like this. Chronicles of the Underworld - City of Bones may not have been a really good movie due to its very obvious weak points. However, it is much better than many other fantasy young adult book adaptations of recent years and therefore, in the end, even with the listed limitations, it is still enough for a decent: worth seeing!

Cinema trailer for the movie "Chronicles of the Underworld - City of Bones (Kanada/Deutschland 2013)"
Loading the player ...