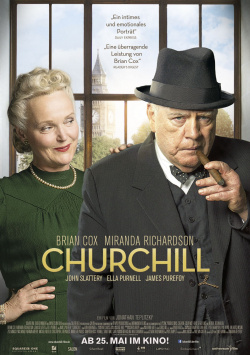 June 1944: In the utmost secrecy, the Allied powers have massed 1 million troops on the south coast of England to strike a devastating blow against the Nazis in northern France. While Generals Eisenhower (John Slattery) and Montgomery (Julian Wadham) firmly believe in the success of the D-Day operation, British Prime Minister Winston Churchill (Brian Cox) wrestles with his conscience. He's tired of the bloodshed and he doesn't want to lose more people to this war. While his doubts fall on deaf ears with the generals, he hopes for advice from his wife Clementine (Miranda Richardson), who has stood by his side like a rock all these years. But the events of the past few years have also left their mark on Clementine, and so in this difficult time, their marriage is also put to the test.

Churchill portrays one of the most famous statesmen in world history during the last four days before the war-deciding D-Day. Almost chamber-play-like, the whole thing is carried primarily by the extremely strong acting of Brian Cox. Director Jonathan Teplitzky also relies on an engaging visual language in some scenes, which actually creates a very stirring atmosphere. But in principle, the film would also work as a play, as it lives primarily on the dialogues and the strong ensemble. This is gripping and on a certain level also exciting, but is in places a little tough.

Screenwriter Alex von Tunzelmann is also a historian. You can see that in some parts of her script, because the historically authenticated moments work much better than the dramaturgical liberties she takes with the conversations between the prime minister and the young secretary Helen (Ella Purnell). Such scenes feel a bit too thick and don't achieve the emotional strength of other moments, such as the brief address Churchill gives to young soldiers just before they leave for battle.

Churchill is a very well-acted history lesson that manages to grip for long stretches, despite the generally familiar outcome. Only a few small lengths and a few too contrived moments tarnish the positive overall impression a little. In the end, however, it is still enough for an absolutely convinced: Worth seeing!

Cinema trailer for the movie "Churchill (Großbritannien 2017)"
Loading the player ...