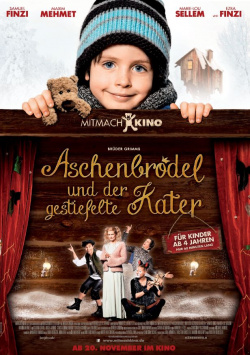 In view of the sometimes very disturbing behaviour of some cinema-goers, who have to play around on their mobile phones during the film, talk loudly to the person sitting next to them or chow down on their nachos in an exaggeratedly noisy manner, it is very commendable that there are many parents who already try to teach their little ones certain rules of etiquette so that other cinema-goers are not disturbed by their offspring. But all praiseworthy educational measures can now be thrown overboard quite confidently - because now comes the first participatory cinema for small and young-at-heart film fans.

In Cinderella and Puss in Boots children may cheer, clap, sing and scream what the stuff holds. In 60 minutes suitable for the target group, two stories from the fairy tale world of the Brothers Grimm are presented by the ensemble of the Berlin Fairy Tale Hut, embedded in a nice frame story: little Paul (Ezra Finzi), who loves fairy tales more than anything, has to move with his parents (Samuel Finzi and Marie-Lou Sellem) from the rural idyll to the grey big city. Paul fears that there are no more fairy tales here. But then he finds a place full of magic and enchantment. Here he learns about the stories of Cinderella (Claudia Graue) and Puss in Boots (Carsta Zimmermann) and learns that there are fairy tales all over the world, as long as he believes in them and supports them vigorously with his joy, clapping, dancing and singing along.

The idea behind the first participatory cinema for children is to introduce them to the cinema experience through play. Miki, the fairy tale bear, helps with this. Again and again he appears on the screen during the course of the film and encourages the children to help him by clapping, singing or sticking out their tongues. The staging of the two plays is kept very simple. There are usually no more than two people on the small stage, who tell the exciting and amusing stories with child-friendly facial expressions and gestures. For adult spectators this may be a bit exhausting. But for small children it is really cute and very lovingly implemented.

The children present at the press screening in Frankfurt took a few minutes before they really dared to follow Miki's prompts. But after a few encouraging shouts from their adult companions, the little ones got fully involved and were clearly having a lot of fun. If you watch the cheering children with their cheeks dyed red with excitement as they leave the cinema with big smiles on their faces, it not only becomes clear that director Torsten Künstler and the actors of Fairy Tale Hut have absolutely hit the mark with the target group. It also becomes clear that a real gap in the market has been discovered with the participatory cinema, which, if successful, will continue to convey a love of cinema to young viewers with further fairy tales in the years to come. And as long as the kids then learn later that you shouldn't interact with the screen at all movies, it's a very nice thing indeed. So grab as many kids as you can and give the little ones a really great cinema lesson. Absolutely recommended for children aged 4 to 6!

Cinema trailer for the movie "Cinderella and Puss in Boots - participatory cinema (Deutschland 2013)"
Loading the player ...