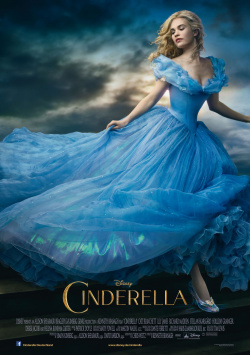 Who doesn't know it, the fairy tale of Cinderella (or Cinderella) who, after the death of her beloved father, is maltreated by her wicked stepmother and her two nasty daughters until, thanks to a fairy godmother, she is allowed to go to a grand ball at the king's castle where the prince falls in love with her? This story has been retold countless times in many different variations. Whether in books, on film or on stage, whether as an animated film, a modern interpretation or a musical, this fairy tale can always fascinate anew. Of course, one may ask whether, after the many film versions of the story, there is still a need for another one. But when the result is as wonderful as in the case of Kenneth Branagh's Cinderella, the answer must be an unequivocal yes.

In the live-action adaptation of the classic Disney animated film, Lily James (Downton Abbey) takes on the title role, and there is definitely something fairy-tale about her performance. Yet she is completely upstaged in every scene by the superb Cate Blanchett as the evil stepmother and Helena Bonham Carter as the fairy godmother. Game of Thrones star Richard Madden also falls a little flat as the prince. But that doesn't spoil the very positive overall impression, since Cinderella and the prince are the smoothest and actually least interesting characters of the fairy tale anyway. And as an identification figure for little girls, the new Cinderella is quite suitable.

With Branagh's film can score points are the great set, the successful special effects and the tongue-in-cheek humor, which is used perfectly whenever the story threatens to become too cloying and colorful. With a lot of self-irony and probably the funniest goose in film history, Branagh does a great job of preventing his film from sinking into Disney-typical kitsch, making it worth seeing not only for girls up to the age of 12. Patrick Doyle's beautiful score also adds a very timeless flair to the film.

What clearly sets this version apart from its 1950 animated counterpart is the attempt to remove the clear division between good and evil. Sure, even here the stepmother is ostensibly evil and the stepsisters mean and spoiled. But the script by Chris Weitz (About a Boy) succeeds very well in giving these characters a second level, which makes their behavior a little bit understandable and does not make them clearly drawn villains. A similar attempt was made with Maleficent, the live-action adaptation of Disney's Sleeping Beauty. There, however, the makers took a much more striking approach, which is why it didn't work as well as it did with Branagh's Cinderella. Anyway, the transformation of the animated world into a real scenario is much better and visually more impressive than the very mixed Maleficent.

Surely, who hopes to discover new sides of the all too familiar story will be bitterly disappointed. In terms of content, this Cinderella really offers hardly any impulses of its own. But anyone who loves timelessly beautiful fairy tales to pine over, who appreciates exciting, humorous and heartfelt entertainment for the whole family, and who simply can't get enough of the story about the beautiful Cinderella with the glass slipper, should not miss the 2015 edition of Cinderella. And for all Ice Queen fans, there's an added incentive for buying a movie ticket. Because before the main film, there is a brand new short film with Anna, Elsa, Olaf & Co. For this beautiful combination, there is then also a very clear: Absolutely worth seeing!

Cinema trailer for the movie "Cinderella (USA 2015)"
Loading the player ...