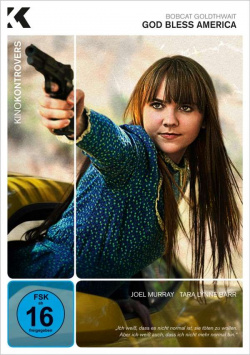 Film: Frank (Joel Murray) was actually always a nice guy. However, it has gotten him nowhere. His marriage has failed and his ex-wife is raising their daughter together to be a spoiled, arrogant brat. His extremely loud neighbors don't give a damn about his polite requests to be a little quieter at night. The nice woman at the reception desk at his workplace, who has greeted him with kind words every morning, feels so pressured by a kind gesture that she reports him to the boss for sexual harassment, which costs Frank his job. And then his doctor also tells him that he has an incurable brain tumour and will die shortly. For Frank, the only way out is to end his life himself. But as he prepares to blow his brains out in front of the TV, he is confronted with a jumble of shallow reality series and pointless casting shows. And suddenly Frank realizes that he can still do humanity a huge favor by ridding it of all the arrogant beauty queens, radical preachers of hate, and talentless casting stars that poison the brains of television viewers day after day. As he launches his crusade against general stupidity, he is observed by sixteen-year-old Roxy (Tara Lynne Barr), who enthusiastically joins the angry Frank. Together, the two embark on a bloody journey across the U.S., ready to put an end to the bad taste and cynicism in their country by any means necessary...

Bobcat Goldthwait achieved cult status in the 1980s as a member of the ensemble of Police Academy films. Now the comedian works behind, rather than in front of, the camera. And his humor has also changed significantly over time. From the rather simple slapstick and simple gags with which he made his audience laugh as Zed in three Police Academy films or as the voice of Mr. Floppy in the series On Worse and Forever, there is hardly anything to be felt in his biting media and social satire God bless America. The humor here is wicked, cryptic, and completely politically incorrect.

Of course, the film should not be taken as an incitement to violence. Because that's definitely not what the satire is trying to be. But as an over-the-top commentary on an anti-social, ego-driven society, Frank's anti-social, murderous actions are absolutely fitting. Frank's reaction, in its drastic way, virtually epitomizes the inability to counter idiocy with reason and with words. People who protest in front of cemeteries because the deceased was homosexual or TV commentators who only spread hate and fear in their broadcasts because of their greed for profit, just cannot be taught better with reasonable arguments.

At the same time the viewer is forced by the drastic brutality straight to critically deal with the topic of the film, to discuss it and also to question one's own attitude. A very good example is the scene in the cinema where Frank deals in his leaden way with telephoning, disrespectful and constantly chatting audience members. Anyone who goes to the cinema to simply enjoy a good film and is then confronted with idiots like this has almost certainly had similar thoughts, but would thankfully never put them into practice. But the fact alone that one has to get so angry about other people that even peace-loving moviegoers develop violent fantasies of a particularly drastic kind shows that there really is a social problem here. Consideration, respect or simple rules of decency have become foreign words for too many people. And this has to be talked about. But then rather with the mouth, than with the gun.

The same applies, of course, to the media criticism that the film practices. Particularly well done here is the resolution of a plot line in which a very crooked singing contestant on a casting show is first completely ridiculed in public and then built up into something of a star. The way Goldthwait resolves this part of the story through an utterance by the casting show contestant that is as close to reality as it is sad shows how well-observed the film is, and how little exaggeration there is in this aspect of the production. For even though all the clips from reality and casting shows Goldthwait shows are staged and don't exist as such, they are not a parody of their real-life counterparts but, unfortunately, a completely realistic portrayal.

God bless America is entertaining and funny - but it is not a purely fun film. The viewer is asked to think and reflect in order to be able to recognize that the satire is a bitter and intelligent criticism of media and society and not a glorification of violence. A film for which the Kino Kontrovers series is just made. Absolutely worth seeing!

Picture + Sound: Since only a data-reduced press sample was available for the test, no rating can be given here about the final image and sound quality. But since the data-reduced version could already convince audiovisually, can also be assumed in the final mix of a good to very good quality.

Extras: Also the bonus material could not be sighted on the press DVD. Announced, in addition to a comprehensive booklet, are an audio commentary by the director and his two leads, interviews, removed and extended scenes, outtakes, a behind-the-scenes look, a music video, a special to the film, and the trailer.

Conclusion: God bless America is a bitterly biting social and media satire in which director Bobcat Goldthwait takes aim at casting shows, reality stars, annoying moviegoers, selfish neighbors, bad parents, and spoiled teens in sometimes very drastic ways. This makes the film an excellent fit in the Cinema Controversies series. But even though Goldthwait's commentary is at times a bit over-the-top and almost nihilistic despite some obvious comedy, the film is full of not-always-pleasant truths that are really worth thinking about and discussing. And that's exactly what this wicked, bloody comedy does then: absolutely worth seeing!