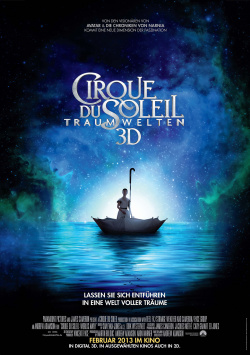 Since it began in 1984 with just twenty performers, Canada's Cirque du Soleil has had over 100 million people around the world raving and dreaming with its mesmerizing shows. Today, this very special circus employs over 5,000 people and is simultaneously on tour with several programs in different cities around the globe. Star director James Cameron is also an admirer of Cirque du Soleil. So it was only natural that Cameron's revolutionary 3D technology and the magical acrobatics of Cirque du Soleil would be fused for the circus' first feature film.

Directed by Andrew Adamson (Shrek), Cirque du Soleil: Dreamworlds attempts to transport the audience into a truly magical world. The story of a young woman (Erica Linz) who falls in love at first sight with an artist (Igor Zaripov) during a visit to the circus serves as the frame story. As she watches him disappear through the circus floor, she jumps after him and ends up in a magical world where she now searches for the love of her life. What follows is a sort of best-of of Cirque du Soleil, as individual numbers from various programs such as Viva Elvis, The Beatles Love, Myst&eacute;re or K&agrave; are presented. Each of these programs presents its own world in which the young woman searches for her artist.

The plot, of course, is completely unnecessary and could have been safely dispensed with. Because in the end not much more happens that the young woman looks around with wide eyes in amazement until the next act starts. There is no question about the quality of the next act. The mixture of breathtaking acrobatics, dance, light and music is always enchanting and fascinating and the talent of the artists always inspires a lot of respect. Yet Cirque du Soleil: Dreamworlds just doesn't want to work right.

The biggest problem is that Cirque du Soleil shows thrive on the live experience. Watching up close how the artists of the circus seemingly defy all limits of gravity is the real fascination of this show giant. And that just doesn't translate to the screen, even with the most modern technology. Some of the acts are very beautiful to watch. But more just not. The dream worlds promised by the title just don't want to emerge, but this could also be due to a very unfortunate staging decision.

Because many scenes take place in front of a black background. As a result, the image often becomes very dark. The 3D glasses then further cloud what little light there is, making viewing quite tiring at times, and also swallowing up a lot of the smaller details. Apart from that, the action seems a bit chaotic and overloaded due to the loose stringing together of show highlights. And that can tug at viewers' nerves quite quickly or lead to terminal boredom. Certainly there will be some viewers, especially die-hard Cirque du Soleil fans, who succumb to the magic of this very unique art form. But this excursion into the cinema is unlikely to be as successful as the live shows. Cirque du Soleil: Dreamworlds is the perfect proof that even the best technology can't be a substitute for the actual experience. Therefore: unfortunately not really dreamlike and therefore only for very enthusiastic fans still worth seeing!