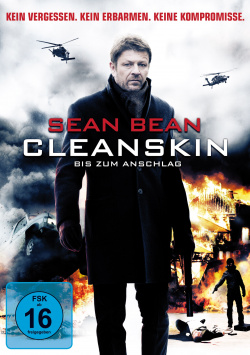 Cleanskin - All the way - DVD

Film: The undercover agent Ewan (Sean Bean) is facing the greatest defeat of his career when the person he was supposed to protect is shot dead in front of his eyes and highly explosive material is stolen. This has apparently fallen into the hands of terrorists who are using it to carry out some deadly bombings in London. They use so-called "cleanskins", sleepers that have not yet been recorded by the authorities and are therefore almost impossible to catch before they can kill themselves and many innocent people. One of these radical terrorists is the student Ash (Abhin Galeya), who actually led a more western life with his girlfriend Kate (Tuppence Middleton). But after their separation Ash is caught in the haze of the hate preacher Nabil (Peter Polycarpou), who finally turned him into a dangerous terrorist. Now Ewan has to find him with his new partner Mark (Tom Burke). And after London has already been shaken by the first attacks, Ewan knows that he must resort to every possible means to prevent another terrorist attack...

"Cleanskin" is an exciting political thriller that illuminates the topic of terrorism from two perspectives. On one side is the undercover agent Ewan, who is convinced that he is acting in the name of justice and who wants to prevent the loss of innocent human lives at all costs. On the other side is the suicide bomber Ash. He, too, believes to sacrifice his life for the just cause. Both men, however, are only chessmen in a murderous game where both sides play wrongly.

And this is the great strength of the movie. Even though the director makes use of well known clichés especially when drawing his characters, he doesn't use the typical black-and-white painting that you can find in this genre again and again. Here there is no clearly definable good and evil. Although the actions of the protagonists can be clearly divided into right and wrong, their motivations are not. While Ewan has very dark sides and especially his clients are characterized by unscrupulousness and corruption, Ash also has something good, which only fades away more and more because of the crazy ideas Nabil hammered into him.

Although the constant flashbacks, which show how the young man changes more and more from a carefree student to an ice-cold killer, are somewhat confusing at the beginning and interrupt the actual flow of action again and again, they are still necessary in order not to turn Ash into a one-dimensional figure. Thus, his character transformation not only experiences an enormous drama, also the finale is much more effective.

With convincing actors and a good mixture of calmer character development and tough, sometimes very bloody action, "Cleanskin - Up to the Point" stands out positively from the mass of similarly knitted political thrillers. It's not a perfect movie, as there are some plot twists that are very predictable and some dialogues are very cliched. The whole thing is staged in an exciting and stirring way and even makes you think here and there. A solid political thriller with a lasting impact. And this is absolutely worth seeing despite some minor weaknesses!

image + sound: The technical implementation of the thriller is on a good level. The picture is very clean and has a high sharpness of detail that only weakens a little in the darker scenes. Also at the strongly mixed colours there is nothing to criticize. The sound alternates between quieter moments, in which the frontal area is more determined by the dialogues, and more action-packed scenes, in which well mixed surround effects take effect. Good!

Extras: As a bonus the DVD has a good making of (about 21 minutes) besides the trailer for the movie. Somewhat lean, but well worth seeing!

Fazit: "Cleanskin" is an exciting thriller, which shows terrorism not only from the point of view of the secret service, which tries to fight it, but also from that of an assassin. The mixture of dramatically dense scenes and tough fighting sequences makes this movie extremely thrilling until its consequent ending. The DVD of this home cinema premiere is technically well done, the bonus material is a bit lean, but worth seeing in terms of content. Anyone who likes political thrillers with a somewhat harder pace can confidently access this one. Recommended