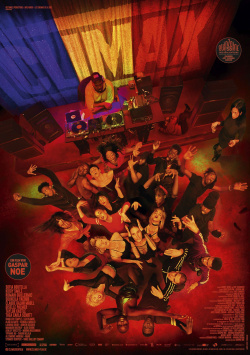 21 young dancers from all over the world, spend an exuberant evening together. After many hard rehearsals, a big tour is about to start. First through France, then through the USA. All participants are excited, their bodies vibrate with adrenaline. The mood is exuberant, everyone dances to the beats that fill the room. But then the mood tips when Selva (Sofia Boutella) discovers that one of them has mixed drugs into the sangria. Now begins a crazy trip full of mutual suspicions, delusions and panic - a trip that will change everything.

One thing right off the bat: Climax is undoubtedly Gaspar No&eacute;'s most innocuous and accessible film to date. However, of course, that doesn't mean that the not-uncontroversial filmmaker is presenting light fare here. But he refrains here both from very explicit sex scenes as in Love or from hard-to-digest violence as in Irreversible. What remains is a visual trip that is truly mesmerizing, at least at first. Here, the viewer gets to see a dance sequence shot in one take, which No&eacute; has executed in a truly original and stirring way.

True to the motto Is this art, or can this go away, Climax will also divide opinions. For me personally, the film was hard to beat in terms of irrelevance, even though I find the visual style quite intriguing. But in the end, the film left me completely cold emotionally, which has never happened to me before with any film by Gaspar No&eacute;. A really very special film that is rather recommended to a niche audience

Cinema trailer for the movie "Climax (Frankreich 2018)"
Loading the player ...