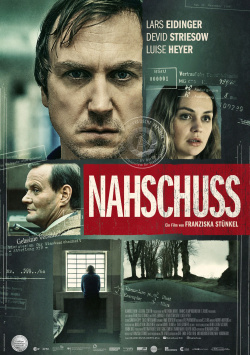 Franz Walter (Lars Eidinger), freshly graduated from Humboldt University, gets a tempting job offer. But before he can work at the university, he would first have to spend some time working for the GDR's foreign intelligence service. Despite some doubts, Franz accepts the offer. The prospect of a professorship is too tempting. The new life brings many advantages for him and his girlfriend Corina (Luise Heyer). And his supervisor Dirk (Devid Striesow) seems to be more than just a colleague. He also becomes a friend and mentor to Franz, especially through their joint foreign assignments in the FRG. But then the job demands things of him that Franz can no longer reconcile with his conscience - and he makes a momentous decision...

With the drama "Nahschuss", filmmaker Franziska Stünkel has directed a film about the death penalty in the GDR that is haunting over long stretches. For the story, Stünkel drew inspiration from the true story of Dr. Werner Teske, the last person in the GDR to be sentenced to death and executed in 1981. She portrays a man who is too easily seduced and thus gets caught up in a system for which he has to betray his moral principles, which ultimately breaks him. This is in parts very gripping and grippingly staged, but also has a few weaknesses.

I had, for example, problems with the fact that by repeatedly interspersing future interrogations that take place, it is revealed very early on where the journey will go for Franz. Certainly: the fact that even in light-hearted moments the sword of Damocles hangs over Franz and threatens to cut his happiness may provide a certain tension. But I would have liked it better not to know what fate awaits Franz. This weakness, however, is almost entirely made up for by a few intense moments and well-placed moments of suspense.

"Nahschuss" ends up being a rather conventionally staged drama that stands out mostly for its extremely strong cast and gripping story. The ending, despite a certain predictability, is absolutely shattering in its consequence and ensures that the film resonates emotionally for a long time. Anyone who appreciates intense dramas from Germany should not miss this film. Worth seeing!