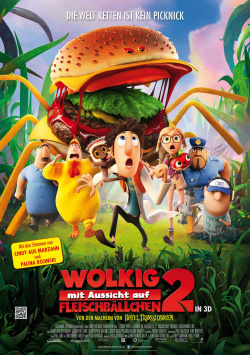 Cloudy with a Chance of Meatballs 2

Young Flint Lockwood and his friends are faced with the mess that Flint's ingenious invention, the FLDSMDFR (pronounced Flitzen-deför) has left behind in his hometown on Monkey Rock. All over the place are the remnants of oversized meals produced by the FLDSMDFR - and now they need to be cleaned up. To do this, genius scientist Chester V, Flint's childhood hero, offers his help. While his team makes the monkey rock habitable again, Flint is supposed to work for him at the Live Corp Company. Naturally, Flint doesn't pass up this opportunity. But even after a few months at his new job, his inventions meet with little approval from Chester V. Just when it seems that Flint has failed once again, he receives an important as well as dangerous assignment from his boss: he is to return to Monkey Rock to deactivate the FLDSMDFR for good with the help of a special USB stick. For the device is still in operation, which means that dangerous animals such as Tacodiles, Shrimpanzees and Frittantulas have evolved from the leftover food. And before these acquire the ability to reach the mainland, Flint must stop them at all costs. Along with his girlfriend, reporter Sam Sparks, and the loyal helpers of his latest adventure, Flint returns to his old home - unaware that he is about to become a puppet in a diabolical plot.

Cloudy with a View of Meatballs 2 picks up right where Part 1 left off. If that first film stood out for its rather endearing mix of original ideas, somewhat over-the-top humor, and very colorful imagery, the makers naturally step it up a notch in the sequel. The New Adventures of Flint Lockwood is even flashier, quirkier, louder, more colorful and faster paced than its predecessor. This has a certain show value and offers especially in the second half also plenty of funny ideas. However, the whole thing clearly comes at the expense of the charm that still ensured in the first part that the attack of the giant meatballs does not degenerate into complete chaos.

Cody Cameron and Kris Pearn, who took their seats in the director's chair for the sequel to the film adaptation of the children's book by Judi and Ron Barrett, seem to have primarily picked out the aspects that, in their opinion, achieved the biggest laughs in the first film. Whether it's the not-so-subtle reactions of the characters to the various incrediblenesses, which is just expressed in wide-open mouths, or the frantic movements of policeman Earl, the foibles of lab monkey Steve and of course the dimwitted dumbass Brent, all of this reappears in intensified form in part 2. It's also quite funny in small doses. But at the latest after half of the movie the hyperactive humor just gets on your nerves.

In addition, the new characters Chester V and the really ugly animated orangutan lady Barb are not really an enrichment for the story. Chester V is way too over the top with his rubber man movements. And with Barb, the fact that she was dubbed far too obtrusively by Cindy von Marzahn in the German version is a particular negative. So in both cases, a more subtle approach to character drawing and dubbing respectively would have been absolutely beneficial.

It's to the creators' credit that they've tried to develop the story and wring new sides out of the concept. But unfortunately they bury many of the pretty and also funny ideas under far too pushily served gags, hectic animations and exhaustingly colorful pictures. And so Cloudy with a Chance of Meatballs 2 also falls into the typical sequel trap: the cramped effort to increase the things that worked well in the predecessor robs the whole thing of its soul and makes it more intolerable than a spaghetti tornado. For viewers who particularly liked the over-the-top humor in the first installment, however, the sequel offers enough accomplished moments to justify buying a ticket. Those who liked the first appearance of Flint Lockwood, however, precisely because of the more subtle gags and the story, will probably rather turn their stomach at this meatball. Therefore: only conditionally worth seeing!

Cinema trailer for the movie "Cloudy with a Chance of Meatballs 2 (USA 2013)"
Loading the player ...