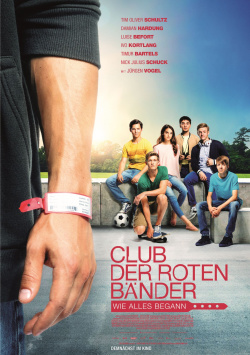 Red Ribbon Club - How it all began

Leo (Tim Oliver Schultz), Jonas (Damian Hardung), Hugo (Nick Julius Schuck), Emma (Luise Befort), Alex (Timur Bartels) and Toni (Ivo Kortlang) are normal teenagers with annoying siblings, inattentive parents and school problems. But these six will soon be bound by a fate that will make these problems seem like small trifles. But it's not yet time for them to join forces as the Red Ribbon Club at the Albertus Clinic. Everything is still normal - especially for Leo, for whom everything seems to be going rosy. But from one moment to the next he is torn out of his beautiful life when he is diagnosed with cancer. Now he's facing a difficult treatment. And as if that wasn't bad enough, his bedmate (Jürgen Vogel) also seems to be a real stinker. Soon the boy is wondering what else is worth fighting for. But he's not alone.

With the series Polseres vermelles, Spaniard Albert Espinosa caused an international sensation. After there were adaptations of the material in various countries, such as Italy and Chile, a U.S. remake was also made in 2014, even enlisting Steven Spielberg as a producer. Despite enormous critical praise, however, Red Band Society turned into a commercial flop and was cancelled after one season. So it was naturally questionable whether a German version of the story would work better. VOX provided the answer in a surprisingly clear way: The first self-produced series of the channel became one of the biggest surprise successes of the television year 2015 and was also able to bring in excellent ratings with the two subsequent seasons.

Espinosa himself described the German adaptation as the most successful film version of his autobiographical story. He was all the happier when he now got the opportunity to tell the prequel as a feature film together with the makers of the series. Jan Martin Scharf, who has already been awarded the Grimme Prize and an international Emmy for his work on the series, co-wrote the screenplay, while series director Felix Binder took over the direction. And also in front of the camera gathered the familiar series faces to slip again into the beloved roles.

Quite clearly: Club of the red ribbons - how it all began would not really have needed it. Dramaturgically, the film doesn't really add any new facets to the series. The whole thing is rather an extended remix of the first episode. For newcomers, therefore, many question marks remain. But for fans - and for them the film is made - this reunion with the series favorites is a successful gift. And that's what matters. The film does a great job of capturing the mood of the series and lays the groundwork in an emotional way for the stories of the club members that have already been told.

A nice new addition is the character Jürgen Vogel gets to play. It is this plot line that really makes the film worth watching. The unusual friendship that develops between Leo and Benni reflects what made the series so special: the viewer can laugh and cry - and sometimes both at the same time. In addition, the characters are really charming, which is why they quickly grow on you. The only really negative thing is that the upcoming club foundation is predicted too penetratingly. Here the makers could have gone gladly somewhat more subtly to the thing.

Club of the Red Ribbons - How it all began is a nice thank you to all the fans who have made the series such a great success. Whether that can be repeated in the cinema remains to be seen. Who now thinks: I liked the series, but do I have to go to the cinema for it? can be told quite clearly: You will like the film, so the purchase of a cinema ticket is also absolutely recommended!

Cinema trailer for the movie "Red Ribbon Club - How it all began (Deutschland 2019)"
Loading the player ...