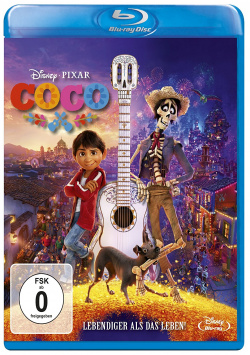 Movie: 12-year-old Miguel has a dream: he wants to become a musician. The boy loves music with all his soul. But in his family, any form of music-making is absolutely frowned upon, ever since Miguel's great-great-grandfather, a gifted guitar player by trade, left his wife and daughter to find success with his songs. On the traditional Dia de los Muertos, of all days, Miguel has the opportunity to participate in a big competition in the marketplace of his hometown. But after his bossy grandmother destroys his guitar, Miguel's dream seems to be over for good. But then the boy finds out that his greatest idol, the great Ernesto de la Cruz, of all people, was his great-great-grandfather. He sneaks into the musician's mausoleum to borrow his guitar for the competition - and ends up in the land of the dead. He could be back with his family real quick if Miguel would just give up music forever. But instead, the boy decides to search for Ernesto de la Cruz in the land of the dead, so that he can be sent home through him and bring the music back to his family. But this endeavor turns out to be more difficult than anticipated.

With Coco, the traditional Disney/Pixar Christmas movie comes to our theaters. The story may sound a little scary at first. But all parents can rest easy: The realm of the dead is colorfully and very positively depicted, and the skeletons who live there seem likeable throughout. There are hardly any really dark, frightening moments - but plenty of humour, imaginative scenes and moving moments. Just as you would expect from Disney. The play with Mexican folklore gives the film a very special look, especially when Miguel steps over the bridge of flowers and enters the land of the dead. Here, the team of Lee Unkrich (Finding Nemo) and Adrian Molina have created an absolutely fascinating blend of fantasy and Mexican culture and tradition after extensive research in Mexico.

With great attention to detail, a world has been created that is hard to get enough of as a viewer. Nevertheless, the story is not overwhelmed by the many visual incursions and can thus develop its emotional impact very well. Even though the ending is predictable for miles and hardly offers a surprise, the finale gives you goosebumps and wet eyes. The story is primarily about family and about memory. But it's also a tribute to music and following your dreams. Sounds like typical Disney themes to me. And even if that's true and dramaturgically nothing new is really offered, Coco's well-balanced mix of adventure, humor and emotion makes it a quite enchanting film that the whole family can enjoy. Absolutely worth seeing!

Picture + Sound: The wonderful detail in the realm of the dead and the richness of the film's colors comes across very well on the Blu-ray thanks to the powerful coloring and high image sharpness. Pleasant image depth and well-matched contrasts underscore the positive overall impression. The audio is in a pleasantly vibrant DTS-HD MA 7.1 mix, with the music and voices well matched to the various sound effects. Very Good.

Extras: While DVD buyers are completely left holding the bag when it comes to extras, there are at least a few extra morsels for those who purchase this 2D Blu-ray. A test diorama (approx. 2:16 min.), a look at the importance of family in the story (approx. 10 min.) and an extra about dog Dante (approx. 6:14 min.) are on the program. Plus, the art director reveals how to draw a skeleton (approx. 3:18 min.). In addition, director Lee Unkrich, co-director and writer Adrian Molina, and producer Darla Anderson provide an insightful audio commentary track, where you can hear even more background information about the making of the film.

If you want to see the full bonus package, you'll have to reach for the much more expensive 3D Blu-ray, which has one more bonus disc with more extras.

Conclusion: Coco tells a rather conventional story by Disney standards, but does so in an extremely charming, imaginative, detailed and moving way. A film to laugh, cry and marvel at - simply wonderful. The Blu-ray convinces with a very good picture and sound quality, only the extras are a bit meager. Nevertheless, there is a clear: Absolutely recommendable!