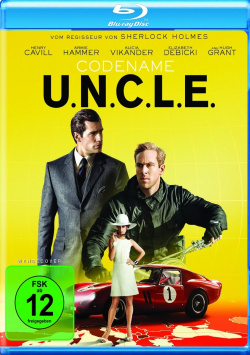 Movie: Once upon a time, Napoleon Solo (Henry Cavill) was a particularly shrewd crook who still faced a few years in prison. But then he was taken from prison by the CIA to put his skills henceforth as an agent under the service of his fatherland. In East Berlin, he is to track down young Gaby Teller (Alicia Vikander), whose father has apparently been kidnapped by a powerful secret organization in order to develop a nuclear explosive device for her. At the last second, the U.S. agent is able to rescue the young woman from Russian intelligence, only to learn that he must henceforth work with KGB agent Illya Kuryakin (Armie Hammer) to prevent the nuclear conflict from escalating. In Rome, the trio is to try to infiltrate the secret organization through Gaby's uncle, find her father and secure his plans to build a nuclear missile. But to accomplish this task, the two agents would first have to break down their mutual distrust and put aside their outsized egos. And that seems like an impossible mission.

Guy Ritchie's agent comedy Codename U.N.C.L.E. is based on the enormously popular 1960s cult series Solo for O.N.C.E.L.. For over 100 episodes, Robert Vaughn and David McCallum solved tricky cases for the United Network Command for Law and Enforcement as an unlikely duo. In Europe, some of the two-part episodes even made it to theaters in a special edited version. But the first proper feature film for the series now comes more than 45 years after the series ended. Guy Ritchie, who has already successfully breathed new life into Sherlock Holmes, presents his remake of the series as a successful mixture of contemporary action comedy and agent film in an atmospheric retro style. The look of the film - from the colour mixing to the set, the picture editing and the costumes - perfectly captures the era of the 60s agent thrillers, while the action scenes are absolutely up to the standard one is used to in the cinema today.

The fact that the film works well, however, is neither due to this successful mixture alone, nor to the rather mixed story. Rather, it is the easy-going playfulness of the main actors and the resulting coherent interaction that makes Codename U.N.C.L.E. an extremely entertaining pleasure. When Solo and Kuryakin try to measure each other on how excellent their secret service technologies are, it makes for some really good laughs in two scenes in particular. When the laid-back dandy, superbly embodied by the Man of Steel Henry Cavill, meets the hulking Russian (wonderful: Armie Lone Ranger Hammer), there's always plenty of potential for an amusing exchange of blows anyway, and the two actors deliver it perfectly. When so much testosterone clashes, there still needs to be a good female counterbalance. And this is provided by Alicia Vikander (Ex Machina), who is much more than just the usual pretty accessory.

But also the supporting cast - from Hugh Grant to the deliciously evil Elizabeth Debicki - know how to convince. With a lot of charm and wit they all save the film even over its somewhat flatter moments. Because from a purely dramaturgical point of view, the agents really don't break any new ground here. The story is not only very predictable, it also has all kinds of logic holes, about which one could be quite a bit annoyed on second thought. But luckily the production and the game are enjoyable enough to nip such thoughts in the bud. So Codename U.N.C.L.E. isn't a milestone of the agent comedy. But if you're looking for entertaining entertainment with nice pictures, fast-paced action and some good gags, you'll be well served. And that's why the bottom line is a well-deserved: absolutely worth watching!

Picture + Sound: The Blu-ray's picture is absolutely clean and has a good to very good overall sharpness in most moments, revealing hardly any visible quality drops even in darker scenes. The warm colors highlight the film's brilliantly retro look. So overall, a very good overall impression prevails, which the sound can also leave behind.

The Dolby Atmos mix is pleasantly lively even in the quieter moments of the story. In the dialogue scenes, the actors' voices are transported out of the speakers with good intelligibility, quite a few sound effects and atmospheric ambient noises ensure that the surround channels are always in use as well. All in all, there is a more than satisfied for it: very good!

Extras: There are some nice extras on the Blu-ray. Starting off with a featurette about the retro look of the film (approx. 8:34 min.), followed by short documentaries about a first-class hero (approx. 7:13 min.), about the M&eacute;tisse motorcycles (approx. 4:49 min.) and about the team of U.N.C.L.E. (approx. 4:57 min.). And of course Guy Ritchie as a man with extraordinary talents (ca. 3:16 min.) gets his own short documentary. In addition, there are four spy on the set clips (approx. 5:16 min.), which offer a little insight into the work on the set. Interesting features, of which there could have been gladly something more.

Conclusion: Codename U.N.C.L.E., the remake of the 60s cult series Solo for O.N.C.E.L.. Guy Ritchie's reimagining of the material is an entertaining agent comedy that uses a convincing cast, a charmingly retro look, and some good action sequences to make up for the somewhat thin story. The Blu-ray presents the film in very appealing picture and sound quality and also offers some nice extras, which are not quite as extensive as I had hoped, but which are well worth watching. Overall, the disc thus deserves a clear: Absolutely recommendable!