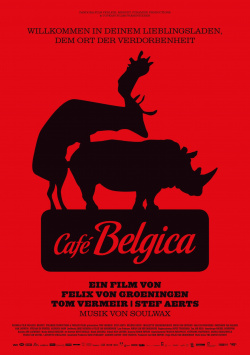 For many years, disparate brothers Jo (Stef Aerts) and Frank (Tom Vermeir) had lost track of each other. But suddenly Frank shows up at Jo's music bar and offers to help him out behind the bar on the weekends - an offer Jo is only too happy to accept. Through the mixture of Jo's business acumen and Frank's willingness to take risks, the Caf&eacute; Belgica quickly develops into an absolute cult hangout that soon needs to be expanded. Despite their differences, the brothers swim on a wave of success and their lives become one long party for that moment. Rock 'n' roll, women, drugs, alcohol - from now on all this determines the everyday life of the two. But when especially Frank loses himself more and more in this intoxication, reality catches up with the brothers with full force again.

With his fifth feature film Caf&eacute; Belgica director Felix van Groeningen delivers the highly anticipated follow-up to his international surprise success The Broken Circle. Expectations are high, as the predecessor left an enormous impression in terms of acting, music, dramaturgy and especially emotion. And of course one expects a similar effect from the sequel. To take it in advance: It doesn't happen this time. Caf&eacute; Belgica has some very good moments, some excellently observed snapshots and interesting characters. However, the story fails to captivate over a running time of more than two hours, nor does it offer anywhere near the kind of emotional depth that The Broken Circle had.

It is quite fascinating how van Groeningen traces the rise and fall of the two brothers here. How he slowly solidifies their estranged relationship, only to have it fall apart again. And it's also very refreshing to see how authentically the story tells the very different effect the events have on Jo and Frank, on their relationship, and on their future. Still, the whole thing lacks the emotional core that binds the audience to the characters. The fact that the production also has a somewhat episodic feel to it, and that some events are only touched upon while other scenes drag on badly, further tarnishes the overall impression.

This is not to say that Caf&eacute; Belgica is a bad film. The actors are very good as they manage to make their characters seem very real. The behind-the-scenes look at the music bar definitely has its fascinating moments. However, all of this wears thin in the long run and since - as the story might have it - a certain superficiality is palpable, in the end you're not left with nearly the lasting and intense impression The Broken Circle was able to leave behind. But for program lovers who want to get an authentic insight into the microcosm of a rock`n`roll pub, the film is definitely worth seeing!