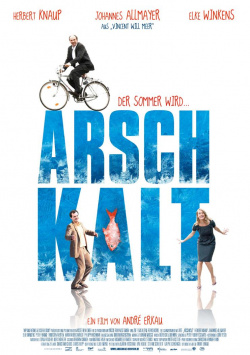 Character-wise, Berg (Herbert Knaup) is at least as hypothermic as the frozen goods he drives to customers in his van. At the latest since he drove his seriously ill father's company into bankruptcy and has since had to earn his modest bread and butter as a frozen food delivery man, Berg has mutated into an absolute misanthrope. When the naively clumsy, extremely talkative Moerer (Johannes Allmayer), of all people, is assigned to him as a partner, Berg's nerves are put to an enormous test. But his new boss Lieke van der Stock (Elke Winkens) demands real team spirit from the cynic so that he can increase his sales and thus secure his job. But even though this plan seems to be working, Berg's problems are just beginning.

With the Max Ophüls Award-winning call centre comedy Selbstgespräche, André Erkau was able to deliver an extremely successful debut as a feature film director. With Arschkalt he now tries to build on this success. In the first minutes he seems to succeed without a doubt. Herbert Knaup proves to be the ideal cast for the misanthrope Berg in the very first scene of the film and the story holds a lot of comedic potential. In addition, Erkau finds a very well-balanced mix of wonderfully whimsical comic moments and moving drama. And last but not least, the chemistry between Knaup and Johannes Allmayer, the secret star from vincent will meer, is just right.

But unfortunately not all elements of the production work so well. For example, some moments that are meant to be humorous in themselves are staged somewhat awkwardly, losing much of their potential comedy. Especially the character of Moerer suffers from this, because in the end the feeling remains that this character could have provided for much better laughs - especially in contrast to the wonderfully undercooled acting Herbert Knaup. Also Elke Winkens does not stand out positively throughout. Especially at the beginning, Lieke's reactions to Berger seem too forced and completely exaggerated. Only towards the end, when her character has calmed down a bit and a little romance comes into play, Winkens can convince with a lot of charm.

Although Arschkalt tells an inherently very simple story, André Erkau has managed to incorporate many little sub-levels into his film, all of which work quite well. Whether it's the father-son story, the budding male friendship between Berger and Moerer, the little love story, the look at the economic situation in Germany spiced with bitter humor, or even the plea to make the best of one's fate and not give in to frustration and emotional coldness, Arschkalt works on all these different levels and, despite the title, is able to spread some warmth in the hearts of the audience.

While the tragic-comedy falls short of its potential in some respects, and in many moments simply operates at a good TV level, the bottom line is that Herbert Knaup's excellent performance and some very pretty gags are enough to classify this work as well worth watching, at least for lovers of German comedies with pretensions.