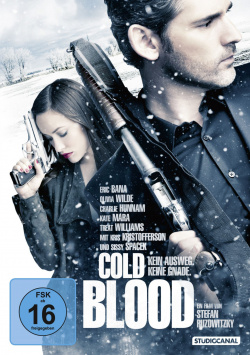 Movie: Actually, the robbery of a casino for Addison (Eric Bana) and his sister Liza (Olivia Wilde) went exactly according to plan. But then they crash a car while fleeing through snowy Michigan. A policeman, who wants to come to their aid, Addison kills without hesitation. He realizes that now it's only a matter of time before more cops show up. To make sure Liza and he make it across the border, Addison decides that from now on they'll have to make their way to Canada separately. While the ruthless gangster leaves a bloody trail in his wake, the attractive Liza is picked up by Jay (Charlie Hunnam), a former boxer who has just been released from prison. Jay, on the run from the police himself, quickly succumbs to Liza's seductive wiles, and so he offers to join her on a trip to Canada after a brief stop at his parents' house (Sissy Spacek & Kris Kristofferson). But Addison's path also leads him directly to the home of Jay's family, for whom Thanksgiving threatens to become a particularly bloody affair this year...

With his US debut Cold Blood, Austrian director Stefan Ruzowitzky (The Counterfeiters, Anatomy) delivers a more than solid thriller in terms of craftsmanship, scoring points with atmospheric imagery, a strong Eric Bana and decent moments of suspense. Set in snowy Quebec, the film itself tells three stories: that of Addison and Liza, who have to fight their way through the Michigan wilderness on the run from the police. The story of Jay, who after his stay in prison becomes a manslaughterer due to an unfortunate accident and thus has ruined his future and once again confirms his father Chet's disappointment. And finally, there's that of young cop Hanna (Kate Mara), who suffers constant humiliation from her superior sheriff (Treat Williams), who also happens to be her father, stupidly, and wants to prove that she can do as good a job as her male colleagues in pursuing Addison.

These individual storylines don't work equally well. The scenes of Addison making his bloody way to Canada are extremely suspenseful and have a very high entertainment value thanks in part to Bana's wonderfully evil acting. The moments between Jay and Liza, on the other hand, fall a little short. Although these are also well played by heartthrob Charlie Hunnan (Sons of Anarchy) and eye candy Olivia Wilde and insofar engaging staged, because the viewer never knows exactly whether Liza is just playing with Jay or actually develops something like feelings for him. Still, these scenes never even come close to the intensity inherent in Addison's escape. On the other hand, the story of police officer Hanna remains completely pale. Although Kate Mara (Brokeback Mountain) delivers a good acting performance, the conflict with her bossy father (Treat Williams) and her striving to convince the male world of her professionalism are altogether too clichéd and lacking in surprise to be really captivating.

However, even though the film loses overall entertainment value due to the uneven distribution of tension and even the ending comes across as a bit rushed, on balance Ruzowitzky has delivered a very good thriller that strives not only for bloody shootouts and duels, but also for a certain depth of character. It's a pity that some of the clichés get in the way, but it doesn't prevent the overall positive impression in the end. Therefore, the following applies: for fans of exciting, slightly undercooled thriller dramas well worth seeing!

Picture + Sound: The image of the DVD presents the film in an atmospheric, slightly undercooled color scheme, which is supported by a good overall sharpness and a decent detail representation. The sound unleashes a coherent ambience with its good Dolby Digital 5.1 mix, featuring dialogue that's mixed for good intelligibility and some decent surround moments. Good!

Extras: The DVD's bonus material has turned out to be a bit too superficial. The two making-of featurettes, Snow & Western (approx. 2:31 min.) and The Family (approx. 2:37 min.), are simply too short to offer any real insight into the making of the film. A little more revealing is the nearly 10-minute German-language interview with the director, in which Ruzowitzky talks about how he came to the project and what his experience was like on his first English-language shoot. Two more promotional interviews with the director and lead actor Eric Bana, as well as the trailer for the film and other programming tips from the provider round out the additional offerings.

Conclusion: Cold Blood is a more than decent thriller that is not equally convincing in all aspects, but overall delivers a decent overall picture. Especially the strong performance of Eric Bana and the dark basic atmosphere of the film comfort over some dramaturgical weaknesses, clichés and the somewhat too hasty finale. Therefore, who appreciates decent and hard thriller fare from Hollywood, which is offered here 90 entertaining minutes. Worth seeing