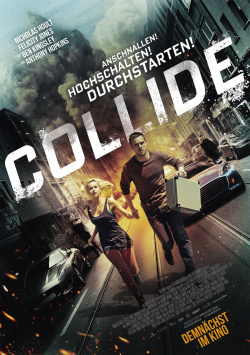 The young American Casey (Nicholas Hoult) is desperate: His girlfriend Juliette (Felicity Jones) urgently needs a kidney transplant. But she would have to return from Cologne to the USA, where Casey is wanted for car theft. And the treatment costs a lot of money, which he just doesn't have. And so there's only one way out for him: he has to get involved in a deal with the crook Geran (Ben Kingsley), for whom he has to steal a load of drugs from the mighty Hagen Kahl (Anthony Hopkins). But the robbery doesn't go as planned and suddenly Casey is on the run from Hagen's brutal henchmen. A merciless hunt over the motorway begins…

With "Collide" the British director Eran Creevy ("Enemies - Welcome to the Punch") delivers a solid action thriller, which does not break new ground dramaturgically and in some scenes seems like the cinema version of "Alarm for Cobra 11". However, even if claim and originality quickly fall by the wayside, the film as a whole still offers decent entertainment. The film was shot in Cologne and at other locations in North Rhine-Westphalia, with some German actors such as Clemens Schick and Joachim Król also appearing in supporting roles. In the center, however, are a rather charismatic Nicholas Hoult ("X-Men"), a criminally underchallenged Felicity Jones ("Rogue One"), a wonderfully over-twisted acting Ben Kingsley and an Anthony Hopkins, who obviously switched to autopilot here. The actually good actors can get the best out of the thin script, which can't always make up for the countless clichés and shallow dialogues.

However, there are some really good action sequences, which make you forget the all too obvious weaknesses of the script for a while. In these moments the movie is really fun - at least if you like rapid chases and fierce duels. However, it must also be said here that one cannot expect big-budget quality in the style of the "Fast & Furious" films. "Collide" was staged with a quite manageable budget and even from the locations in Germany not quite great cinema, but just TV quality was brought out. That's solid, but not more than that.

Logic, multi-layered characters and a sophisticated story shouldn't be expected. But those who always wanted to see Ben Kingsley as a Turkish dealer and who don't expect more from an action movie than good entertainment, in which you can almost completely shut down the brain activity, will get enough good moments here, which justify the purchase of a movie ticket. Worth seeing!

Cinema trailer for the movie "Collide (Großbritannien/Deutschland 2016)"
Loading the player ...