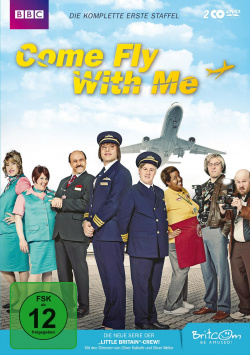 Come fly with me - The complete first season - DVD

Content: The makers of Little Britain have struck again. After their attempt to repeat the success of their comedy series with a US version failed, it was time to finally retire the beloved characters from Little Britain and start something new. It was clear that a new project would always be compared to Little Britain, especially at the beginning. David Walliams and Matt Lucas have perhaps not completely moved away from the successful concept. Because also in their new series Come fly with me they slip into many different roles, which do their mischief with mostly politically incorrect humor in gags linked by a narrator voice.

Besides the fact that Come fly with me is not quite as raunchy and crude as Little Britain, there are also other aspects that make this series a standalone project. For example, the series is set entirely in one location, an airport in Britain, where the experiences of both staff and passengers are presented in the form of a mockumentary. Whether it's Omar, the owner of a budget airline who keeps getting involved in several scandals, the snobbish first-class stewardess Penny Carter, who sometimes has a lovable old couple thrown off the plane if they don't fit into her image of classic first-class guests, or the check-in employees Melody and Keelay, whose mare biting causes quite a bit of tension at the counter, they all make sure that everyday life at the airport never gets boring.

Also the overly patriotic Ian Foot, head of immigration or Precious Little, who never misses an opportunity to close her little coffee stand early and finally the steward Fearghal, a walking cliché, are part of the team at the airport, where a somewhat strange paparazzi duo is also up to their mischief. They supposedly manage to take the most outrageous photos, but eventually one of them falls from grace.

Up to fifty different roles are played by David Walliams and Matt Lucas in their new series. The characters, as well as the makeup and, of course, the gags themselves, thrive on being completely over-the-top. Even though there are some bitterly evil moments in the very first episode, it seems at least at the beginning that Walliams and Lucas are still acting a bit reserved here, in order not to let the parallels to Little Britain seem too obvious. But once the series has found its own tone and stepped out of the shadow of big brother Little Britain, the biting, politically incorrect and at times extremely funny fun can fully unfold here as well.

Amusing are also small celebrity guest appearances. Especially the little self-deprecating appearance of Harry Potter Ron Rupert Grint is really a lot of fun. But the absolute highlight is Friends star David Schwimmer, who had directed some of the US episodes of Little Britain and in whose luggage some very disreputable DVDs are found, which he of course transports only for his colleague Matt LeBlanc.

Although the original version of course has more wordplay, the dubbing can also be described as absolutely successful. As with Little Britain, Oliver Kalkofe and Oliver Welke are again responsible for the German version, which has saved much of the joke and the language style in the German version. If you like British humour of the weird and politically incorrect kind, Come fly with me is highly recommended. Those expecting a second Little Britain might be disappointed. Who gives the staff and the passengers of this somewhat different airport a chance, which will be able to amuse themselves at the latest in the second episode deliciously about this Britcom. Recommendable!

Picture + Sound: The technical realization of the comedy series is on a good level. The image is largely clean, sharpness and coloration are satisfactory and only here and there are small flaws such as minimal image noise or blurring can be discerned. For a TV production, absolutely satisfactory. The same applies to the sound, where of course only the dialogues count. These are then also mixed well understandable. That there is little movement in the tonal events and surround effects are almost non-existent, falls here hardly negative weight. Good!

Extras: Heart of the bonus material is the very good, almost one-hour Making of. Here a detailed interview with the two actors alternates with insights into the shooting. It is very nice that not only amusing things are shown here, but that the viewer is offered really interesting information about the shooting at an airport. For example, that there are sometimes tensions and the logistical planning was not always easy or that the crew was constantly surrounded by interested observers. A very good documentary, which can be watched optionally with German or English subtitles.

In addition, the DVD has a short look at the dubbing work of Oliver Kalkofe and Oliver Welke to offer, as well as a picture gallery and short amusing commercial trailers, which were broadcast by the BBC in the Christmas program. Good!

Conclusion: Come fly with me takes a little time to step out of the oversized shadow of Little Britain and find its own tone. But once that has been achieved, the bitterly wicked, wonderfully politically incorrect humour of comedy duo Lucas/Walliams is once again revealed. Not all characters work equally well, but the bottom line is that Come fly with me is once again British comedy of a particularly nasty kind. The DVD is technically well implemented, in the bonus material especially pleases the detailed, very good making of. Recommendable

Cinema trailer for the movie "Come fly with me - The complete first season - DVD (Großbritannien 2010)"
Loading the player ...