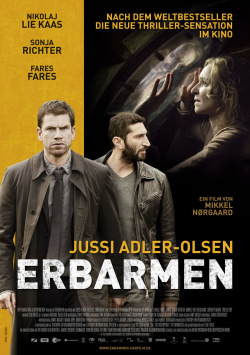 When a colleague is killed by his hot-headed behavior during an operation and another is seriously injured, Carl Mørck (Nikolaj Lie Kaas) is transferred by his superior to the newly founded special department Q. There he is to take care of unresolved cases, which he is to bring to a close without much investigation. An extremely ungrateful task, which does not exactly distract the policeman from his heavy feelings of guilt. The fact that with the Syrian Hafez el-Assad (Fares Fares) he has an assistant at his side doesn't make things any easier for the loner. And so he does what he does best: he throws himself with full commitment on one of the unsolved cases: the disappearance without a trace of the politician Merete Lynggaard (Sonja Richter). They say she committed suicide on a passenger ferry. But Carl and Assad quickly find clues that make them doubt this version. But it's not just the fact that her superior doesn't like it at all that the two cops leave their cellar archive for the investigation that makes solving this mystery such an insoluble task - Carl doesn't even suspect that a dramatic race against time has just begun&.hellip;

After the "Millennium" trilogy by Stieg Larsson was a complete success not only as a book but also in the cinema, other crime novels from the far north are now making the leap from bestseller lists to the big screen. The novels by Jussi Adler-Olsen about the investigators Carl Mørck and Hafez el-Assad from Special Department Q are virtually predestined for this, as the books in this series enjoy ever increasing popularity with each new volume. In cooperation with ZDF, the first two volumes have already been filmed and the adaptation of volume 3 "Erlösung" is already being prepared. So even before its launch there is a great pressure for success on "mercy". On the one hand there are the high expectations of the numerous fans of the novel, on the other hand there are those of the production companies who also want to lucratively exploit the next parts in the cinema. The question now arises as to whether "mercy" can meet these expectations?

Naturally, it is never possible to say in advance whether a film will be a commercial success. From an artistic point of view, however, this can certainly be evaluated. And "mercy" can be completely convincing. Surely, the whole thing has a certain TV character and hardly differs from other Nordic thrillers, which regularly let the blood freeze in the veins of the TV viewers. Nevertheless, the first deployment of Special Section Q works especially well in the dark cinema, as Merete Lyngaard's cruel fate can fully unfold its claustrophobic effect here. Even those who have already read the book and thus know the outcome of the story will be spellbound by the excitement and sometimes literally pushed into the cinema seat by the tension.

Of course director Mikkel Nørgaard had to make some cuts to transform the 400-page book into a 97-minute film. However, this compression has not really damaged the story, especially as the nested narrative style, which takes place on two time levels, has been retained. They also turn the film into an exciting puzzle game that has not a single second of boredom to offer until the finale. You can see in the film that screenwriter Nikolaj Arcel, who has already transformed Stieg Larsson's "Blindness" into a gripping screenplay, really understands his craft. Sure, the whole thing isn't really innovative. "Mercy" is a typical representative of a genre whose rules he follows in a stirring way without adding his own impulses. Nevertheless, the story works really well both as a book and as a film.

With two great main actors, between whom the chemistry is just right, and a dense, atmospheric staging, "Mercy" offers solid thriller entertainment that makes you want more. If this level is maintained, Mørck and Assad will be happy to investigate more often in the cinema - even if it is strictly speaking a television production. Absolutely worth seeing]

Cinema trailer for the movie "Compassion (Dänemark/Deutschland/Schweden 2013)"
Loading the player ...