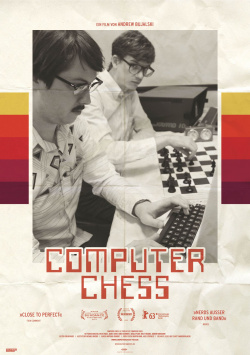 Since computers have existed, there have also been people who program them so that you can play chess against them. As early as the early 1980s, ambitious programmers regularly met at conventions to compete against professional players with their chess programs. What happens when such nerds meet a group of esoteric self-actualizers, when the computers don't want what their programmers want, or when a woman suddenly appears in the midst of the group of primarily male computer specialists, is documented in the film Computer Chess.

Pitched like a documentary, the film, shot in black and white on video, quickly reveals its staged character. For example, the film crew can be seen at work and there are numerous too-perfect cuts between two people talking, which would simply not be possible in such a way in a real documentary. Nevertheless, as a viewer you keep forgetting, especially at the beginning, that this is not a real time document from the 80s. The equipment, hairstyles, clothes, all that the makers have brought to the point with absolute genius.

When the participants of the congress sniff at each other at the beginning, set up their huge equipment, only to admit defeat to small programming errors, then this has a very high entertainment potential, especially through the consistent retro look. However, the movie quickly reveals that it also has another, very bizarre side to it, which takes over more and more as the movie progresses. It all starts with the fact that, without any further justification, it is shown that there is an astonishingly high number of stray cats roaming around the convention hotel - a fact that is accepted by the guests without much surprise as seemingly completely normal. But normal is something else.

This at least earns the film the distinction of being something very special far from the mainstream. But at the same time the independent work becomes extremely bulky and exhausting for many viewers, whereby of course the initial entertainment value is lost. Therefore, not only a weakness for retro-look and chess computers, but also a preference for film material of the particularly weird kind should exist in order to fully enjoy Computer Chess. Because only then is this very unusual work: well worth seeing!