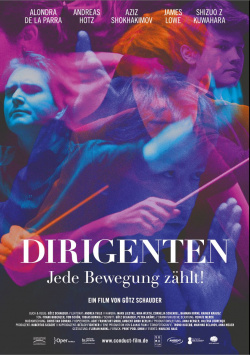 Since 2002, an International Conductors' Competition dedicated to the conductor Sir Georg Solti, who died in 1997, has been held every two years at the Alte Oper Frankfurt. Young up-and-coming conductors face a jury of experts here in order to make the hard way to the finals. The winner will receive prize money of 15,000 euros, the runner-up another 10,000 euros and third place 5,000 euros. In addition, the first and second place winners will have the opportunity to conduct the Frankfurt Opera and Museum Orchestra, the Frankfurt Radio Symphony Orchestra and other German and international orchestras. So far, the renowned competition has been held seven times. Filmmaker Götz Schauder accompanied the fourth competition in 2008 with his camera.

Conductors - Every Movement Counts observes five of the 24 participants from their journey to Frankfurt through the preliminary rounds to the final. They are very different protagonists, such as Alondra de la Parra from New York, who is already a celebrated conductor in America and who would also like to make her breakthrough in Europe with her participation. Or Aziz Shokhakimov from Uzbekistan, who at just twenty years of age wants to prove that he is one of the great up-and-coming conductors. He has to hold his own against the Englishman James Lowe, the German Andreas Hotz and the Japanese Shizuo Z Kuwahara. The latter has a very special effect on the jury and the orchestra, as he does not conduct with a baton, but only with his hands.

On the basis of these protagonists, the film allows the audience to feel the emotional highs and lows, the enormous pressure that weighs on the participants and the joy of reaching the next round as well as the disappointment of elimination. At the same time, however, you also get to look over the jury's shoulder as they make their decisions, which is no less interesting. Thus, especially in the first hour, a really rousing insight into the competition emerges, during which one develops a whole new respect for the profession of conducting as a viewer.

While the film takes quite a lot of time to introduce the participants portrayed and to accompany the preliminary rounds, the finale is ticked off a little too quickly. If you don't pay attention for just a little moment, you don't really get to see who actually won. Thus, one of the possible emotional climaxes is almost not used at all. That's a little bit of a pity, because at this point you're really rooting for the finalists. One would have wished for more than a rather casual ticking off of the big decision. Nevertheless: All in all, Dirigenten - Jede Bewegung zählt is an entertaining and interesting documentary that can be recommended not only to lovers of classical orchestral music. Worth seeing

Cinema trailer for the movie "Conductors - Every Movement Counts (Deutschland 2015)"
Loading the player ...