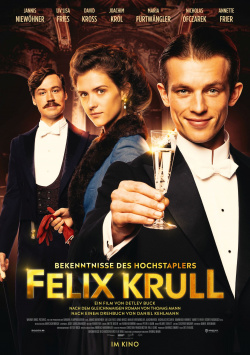 Felix Krull (Jannis Niewöhner) may come from a simple, middle-class background. But if there's one thing this attractive young man can do, it's slip into other roles. As an elevator boy in a posh Parisian hotel, he can learn a lot from the well-heeled guests, while supplementing his finances with special attentions for ladies from good families who have arrived alone. The real life of luxury is within his grasp when Felix meets Marquis Louis de Venosta (David Kross), who is hopelessly in love. The two men come up with the idea of swapping identities for a while so that the Marquis can be with the love of his life, Zaza (Liv Lisa Fries), undetected by his strict father. In the process, however, Felix conceals the fact that Zaza also owns his heart. But the urge to break out of his life completely seems to be bigger than his love....

After a 1957 film adaptation starring Horst Buchholz and Liselotte Pulver and a five-part TV miniseries from 1982, Detlev Buck now also ventures to adapt Thomas Mann's classic "Bekenntnisse des Hochstaplers Felix Krull". The screenplay by writer Daniel Kehlmann, whose novel "Die Vermessung der Welt" was also filmed by Detlev Buck, gives the story a character all of its own. In essence, Kehlmann remains true to the original, which Mann actually wanted to continue in further books. However, he changes some characters and plot lines in such a way that the whole thing still seems fresh and rousing even for connoisseurs of the novel or the earlier film adaptations.

Some plot elements - such as the blackmail by head waiter Stanko (played magnificently nasty by Nicholas Ofczarek), the mostly humiliating relationship with Madame Houpflé (Maria Furtwängler) and ultimately the love for Zaza - are admittedly infused with a certain heaviness and sadness. It is to Buck's credit that his production nevertheless has a great lightness of touch that carries the film through its two-hour running time. Felix Krull himself says in the film that his story ends at a point where it actually only just begins. And so, as a viewer, you also get the feeling that things are just getting started and that you'd like to spend more time in the world of the charming con man. Nevertheless, the conclusion is round and absolutely satisfying.

The ensemble is great throughout. Jannis Niewöhner plays the title character with an uncanny amount of freshness and charisma, David Kross gives a very endearing portrayal of the love-struck Marquis, and Liv Lisa Fries also plays as strong as she is enchanting. Together with Detlev Buck's coherent staging, they contribute to the fact that this literary adaptation is anything but dry, unwieldy material. Rather, the film is great entertainment cinema, which sometimes convinces with pointed humor and in other moments hits right to the heart. For this, there is clearly a: Absolutely worth seeing!

Cinema trailer for the movie "Confessions of Felix Krull (Deutschland 2021)"
Loading the player ...