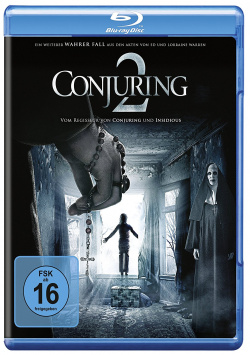 Movie: 1977: Ed (Patrick Wilson) and Lorraine Warren (Vera Farmiga), the paranormal's most famous investigators, have been the focus of nationwide media attention since the events surrounding the Lutz family in Amityville. But what they experienced in the house has left its mark on Lorraine in particular. And so she asks her husband that they not take on any new cases for the time being. But then comes a request from the church that they can't refuse: In the British town of Enfield in north London, single mother Peggy (Frances O`Connor) and her four children are terrorized by a ghost that keeps possessing little Janet (Madison Wolfe). The couple is to find out if there really are supernatural forces at work here. Only then would the church step in to help with an exorcism. It all looks like a routine case - but the demonic force that awaits them in England becomes one of the biggest challenges of their lives for Ed and Lorraine.

In 2013, James Wan delivered one of the best and most effective scary movies in recent years with Conjuring - The Haunting. Inspired by true events, the psi thriller about battling a demonic visitation in a remote Rhode Island farmhouse grossed over $300 million worldwide on a production budget of just $20 million. After a rather weak (but also successful) spin-off about the possessed doll Annabelle, the inevitable sequel is now coming to our cinemas after the huge success. It was to be feared that this would be only a tired copy of the original. But James Wan has delivered a real masterpiece of modern creepy cinema with Conjuring 2, almost in a league with classics like The Exorcist or Poltergeist.

The craftsmanship is noticeable right from the start. In the first ten minutes, the film deals with the story surrounding the Lutz family home, which has been filmed several times before as The Amityville Horror. In doing so, Wan manages to build up more effective shock moments and oppressive creepiness in that short time than the 2005 film version managed in 89 minutes. These events, however, are merely the catalyst for a very different story that will have its viewers hopping out of their movie seats in shock more than once. As with Part 1, Wan uses more traditional means to make his audience's blood run cold. Eerie creaks, scary voices, ghostly shadows, things moving on their own or suddenly appearing grimaces - this is truly more effective than gallons of movie blood spilled in other genre films.

The reason the two Conjuring films work so well, however, is precisely because Wan doesn't just rely on the creepy elements. He also cares about the characters and their story. He takes his time to develop the characters and also offers small scenes like the one in which Ed sings for the children of Peggy Can`t help falling in love by Elvis Presley. Even though such moments seem unimportant to the actual story, they do lead to the viewer becoming attached to the protagonists and sympathizing with their fate. Sure, the movie seems very long with a running time. But despite numerous quiet character moments, there is never any real boredom, as the basic ominous atmosphere is maintained.

In addition, short humorous interludes are allowed, so that the film never runs the risk of taking itself too seriously. All this results in an absolutely coherent and gripping overall picture, both in terms of craftsmanship and dramaturgy, garnished by a handful of great moments of terror. The demon in the form of a nun, who is soon to get his own spin-off, will probably give some viewers sleepless nights. If you like classic scares and the first Conjuring movie, you definitely shouldn't miss this excellent thrill ride. Also suitable for people who don't have nail scissors handy at the moment, because by the end of the film your fingernails are guaranteed to be nibbled short! Absolutely worth seeing!!!

Picture + Sound: The technical realization of the film has turned out very atmospheric. Even if there are some minor weaknesses in the darker scenes in the detail to discover, the color scheme and the coherent contrast blend yet capture the gloomy-tense mood of the story very well. The purposefully used sound effects further underline this impression. They repeatedly provide pleasant dynamics on the surround channels in an otherwise rather restrained sound mix. Overall, this earns an absolutely deserved: good!

Extras: The bonus material is relatively extensive, but remains a little too superficial in the important aspects. This is especially true for the making of, which is good but far too short at 10:09 mins. It's a similar story with the short documentary about the real story, which also features the real people involved (approx. 12:46 min.). This is followed by a featurette about the making of Crooked Man (approx. 6:44 min.), as well as a featurette about the studio where the film was shot, which is said to be haunted (approx. 5:08 min.). Another short documentary about the film's score (approx. 7 min.), as well as four unused scenes (approx. 6:31 min.) round out the Blu-ray's additional offerings.

Conclusion: Conjuring 2 is an absolutely successful sequel, which is almost as good as its predecessor and can play at the top of the genre league in terms of scares. On the Blu-ray, the audiovisuals ensure that the creepy atmosphere can spread throughout the home theater. The bonus material is decent, but unfortunately sometimes a little too superficial in terms of content. All in all, however, that is enough for a very clear: Absolutely recommendable!