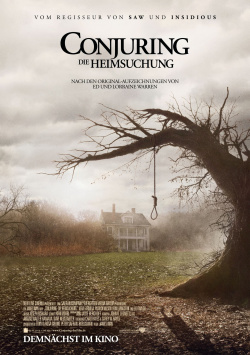 It was supposed to be an idyllic new beginning for Roger (Ron Livingston) and Carolyn Perron (Lili Taylor) when they move into a remote farmhouse with their five daughters. But as strange noises and mysterious occurrences begin to pile up, the family realizes that something else is living in the house that could be dangerous to them and their children. The famous psi-experts Ed (Patrick Wilson) and Lorraine Warren (Vera Farmiga) are supposed to help them find out if the house is really haunted and how to get rid of the ghost. If the two still believe at the beginning that it is a simple routine case, which can be explained by air in the pipes and working wood, they must find out that they have to do here with a particularly vicious demon, which does not want to be driven away so easily.

Conjuring - The Visitation is based on the records of Ed and Lorraine Warren, whose work has also inspired films such as Amityville Horror or The House of Demons. Although there are many doubts about the veracity of the findings the pair claim to have made while investigating various haunted houses, the work of the demonologists holds a tremendous fascination for many. In particular, their most famous case about the house in Amityville on Long Island still gives comforting goosebumps after many years and several film adaptations. SAW director James Wan, however, has taken on a lesser-known case of the two and turned it into a creepy shocker of a particularly effective kind.

Actually, the film shouldn't work. After all, it comes across as a best-of of haunted house and demon horror, with Amityville Horror in particular, of course, but also Poltergeist, The Exorcist and similar genre classics being all too obvious godfathers for various scenes. This leads to the fact that you, as a connoisseur of the subject, always know exactly what's coming next. Big surprises are scarce and actually you should not even be scared or even afraid. But far from it: James Wan has put together the known set pieces so well that Conjuring - The Haunting has become one of the best and most effective scary movies of recent years.

Due to the fact that Wan here renounces excessive brutality as in SAW and relies mainly on original goosebumps and shock effects, he builds up a tense basic atmosphere after a few minutes, by which the viewer is pressed more and more into the seat from minute to minute. Of course, the characters behave very clichéd and not exactly rational. But being bothered by that doesn't change the fact that this misbehavior, typical for horror movies, leads to some really nerve-wracking moments. There will probably be very few viewers who won't be scared out of their wits at least twice here and join in the collective outcry that goes through the cinema.

And that's exactly why Conjuring - The Haunting is so much fun, despite its high recognition value. It doesn't set out to be the grossest or most brutal splatter movie by any stretch of the imagination, but rather to terrify the audience in a very classic way. And for that, Wan very skillfully pulls out all the stops that the genre has in store. Here proves once again that well stolen can sometimes be much better than poorly thought up yourself. So if you're looking for innovation and hope for something completely new, you'll be disappointed by this horror story, at least from a dramaturgical point of view. But if you want to see that tried and true can still be extremely effective and that it can be very because more terrifying when many liters of film blood are dispensed with and you are instead confronted with the primal fears of many people, then you should definitely join these very special ghost hunters. Absolutely worth seeing!

Cinema trailer for the movie "Conjuring - The Haunting (USA 2013)"
Loading the player ...