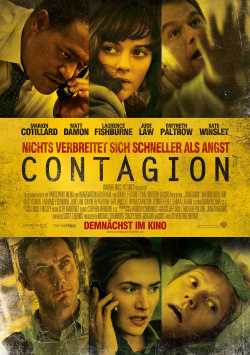 When Steven Soderbergh calls, then the stars come in droves, even if it is only for a few minutes lasting role. For his thriller Contagion, the versatile director was also able to round up a truly exceptional ensemble that plays through a frighteningly realistic horror scenario with aplomb.

When Beth Emhoff (Gwyneth Paltrow) returns from a business trip to her husband Mitchell (Matt Damon) and their son, she carries not only an unsightly secret, but also a vicious virus. Only a short time later, Beth and her son are dead. And they're not the only ones. In various cities around the world, the unknown virus is spreading at breakneck speed. While doctors and scientists desperately search for a vaccine and epidemic experts like Erin Mears (Kate Winslet) try to cope with the increasing chaos within the population, the blogger Alan Krumwiede (Jude Law) exploits people's fears for his own purposes. But after a short time already they Allen realize that the fight against the virus is becoming more and more hopeless by the day, revealing the particularly ugly face of a panic-stricken society.

With Contagion, director Steven Soderbergh creates a very believable horror scenario that turns out to be extremely effective precisely because of a rather sober, matter-of-fact approach to the subject matter. Admittedly, Soderbergh also uses imagery here and there that is very typical for films in which humanity is threatened by a plague, a natural disaster or by other dangers. Deserted streets, desperate crowds, emptied supermarket shelves. Yet the production always feels restrained, always putting the dialogue and the strong actors in the foreground.

The course of a worldwide pandemic is illuminated from the point of view of the first victims, researchers, politicians and very ordinary people. At the same time, the dramaturgy is not overblown and not too much played with the emotions of the audience. It is as simple as it is ingenious how Soderbergh shows how easily such an epidemic can spread. By pausing the camera on door handles, subway grab bars, or elevator buttons and observing how often people grab their faces as a matter of course, he creates a depressing sense of real-life menace that keeps the viewer glued to the seat from the first minute to the last.

especially in the moments when Soderbergh shows what ordinary people are driven to do when they have to fear for their own lives and those of their families, the reality-based production unfolds its full power. Especially Matt Damon can fully convince here. How he tries to protect his daughter from getting sick as well is probably understandable for every viewer and thanks to a rather reserved performance of Damon very moving. But whether it's Matt Damon, Kate Winslet, Marion Cottilard, Laurence Fishburne, Bryan Cranston (Breaking Bad), Armin Rhode or Jude Law, they all ensure with intense performances that the script by Scott Z. Burns (The Bourne Ultimatum) is not only convincing on paper.

Steven Soderbergh once again relies on a narrative style for Contagion that has already made Traffic a very special movie experience. Sober, almost distant, he directs a story that just because of that seems frighteningly realistic and extremely intense. And even if there is a small glimmer of hope at the end, after this film you can't help but wash your hands intensively. Therefore: for lovers of sophisticated entertainment and great actor cinema Contagion is absolutely recommendable!

Cinema trailer for the movie "Contagion (USA 2011)"
Loading the player ...